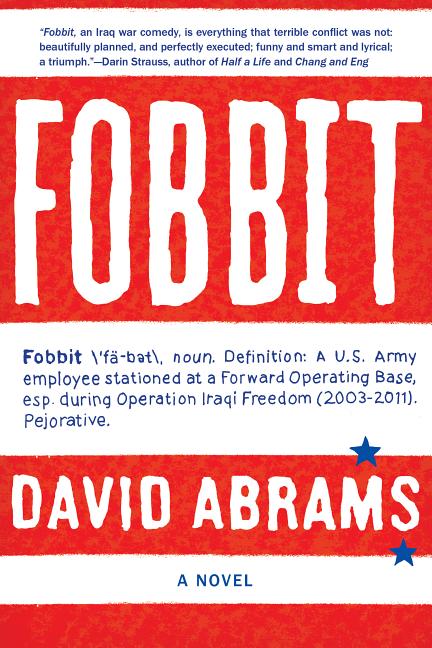 In the satirical tradition of Catch-22 and M*A*S*H, Fobbit takes us into the chaotic world of Baghdad’s Forward Operating Base Triumph, or FOB, where people eat and sleep, and where a lot of soldiers have what looks suspiciously like a desk job. Male and female soldiers are trying to find an empty Porta Potty in which to get acquainted, grunts are playing Xbox, and a lot of the senior staff is more concerned with getting to the chow hall in time than worrying about military strategy.

What The Reviewers Say
Rave Caleb Cage,
The Rumpus
... the truly significant aspect of his work is that he tells a story about one of America’s most recent wars that will seem alien to most of the American public ... Accordingly, it is a book about the absurdity of the way the war is fought, the way the war is projected back home, and the massive gulf between the two ... Like characters in a Laurence Sterne novel, they have great and meaningful names ... This work will almost certainly infuriate many who pick it up. It does not glamorize the heroics of those fighting on the so-called front lines. It does not speak to the worldview that has mostly associated itself with the current wars. And it does not tell a particularly flattering story of American culture, either. But it does tell a story that many who lived it will remember. It does update the classic wartime themes for this generation’s war, and hopefully it will open the door for other literary perspectives to be developed in the future ... a cynical satire in the same vein as the best works of legendary wartime authors like Evelyn Waugh, Kingsley Amis, Kurt Vonnegut, and especially Joseph Heller.
Read Full Review >>
Positive CHRISTIAN BAUMAN,
The New York Times Book Review
Abrams makes some beginner’s errors: the dialogue is occasionally stilted, and I wish he spent more time with the actual Fobbits instead of the infantryman Capt. Abe Shrinkle, whose incompetence makes Gooding’s job more challenging. At the start of the book, there is a joke about the illicit relationship between a couple of young enlistees, Simon and Allison. It’s funny — but it also gets at the intimacy of war, the primordial connection, the need for human contact in the face of death. Fobbit could have done with more of this. But this is a minor complaint, and in fact I applaud David Abrams for sticking to his vision and writing the satire he wanted to write instead of adding to the crowded shelf of war memoirs. In Fobbit, he has written a very funny book, as funny, disturbing, heartbreaking and ridiculous as war itself.
Read Full Review >>
Positive NICHOLAS BASBANES,
The Los Angeles Times
The problem with writing a darkly comic novel about soldiers caught in the maelstrom of modern warfare is that it inevitably invites comparison with Joseph Heller’s classic Catch-22, which is unfortunate, because, let’s face it, there’s only one Mt. Everest in the Himalayas. Abrams seems to concede this tacitly in the text — his alter ego Gooding is reading the book by a swimming pool in Qatar while on R&R — and more pointedly again in his acknowledgments ... But Abrams does have a genuine sense of humor that is more often than not on point, and a productive sense of irony to go with it that takes full advantage of a milieu in which irony abounds. Fobbit is an impressive debut and holds out promise for more good things to come.
Read Full Review >>
See All Reviews >>
SIMILAR BOOKS
Fiction

The House of Fortune
Jessie Burton
Mixed
What did you think of Fobbit?
© LitHub | Privacy