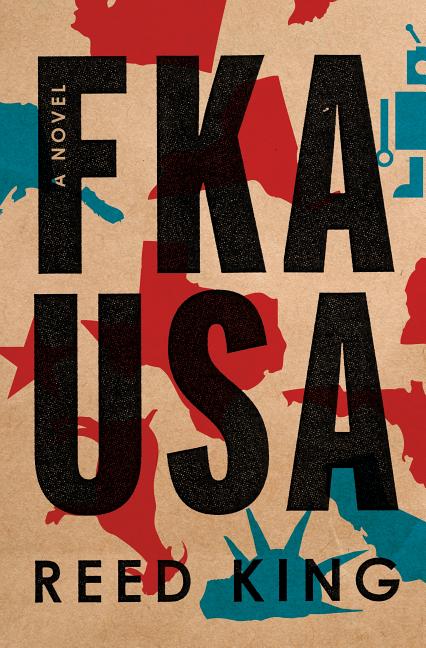 The United States has dissolved in the wake of environmental disasters and the catastrophic policies of its final president. It is 2085, and Truckee Wallace, a factory worker, has no grand ambitions besides maybe, possibly, losing his virginity someday. But when Truckee is thrust unexpectedly into the spotlight he is tapped by the President for a sensitive political mission: to deliver a talking goat across the continent. The fate of the world depends upon it.

What The Reviewers Say
Rave Jason Sheehan,
NPR
It is, in many ways, the sort of book I'm always looking for—a glorious mess; a jangly, spit-and-duct-tape creation that you can feel shaking itself to pieces even as you read; a visionary head-trip of apocalyptic political satire; a kitchen sink quest story that reads like someone's high school RPG session gone full-on Technicolor bonkers ... I love the abuse of footnotes. I love the story-within-a-story set-up. I love the opportunity it offers for multi-layered satire. It rarely works, (and it doesn't always work here), but when it does, FKA USA becomes like Rudy Rucker writing The Handmaid's Tale. It's an irradiated, poisoned, oppressive dystopia, sure, but that doesn't mean we can't all have a little fun along the way, right? ... This is a weird, loud, violent, funny, profane journey across the blasted ruin of our future from the first word to the last, that never pretends to be anything else. And if you aren't interested in the ride, that's fine. That just means more goats and robots for the rest of us.
Read Full Review >>
Rave Pauline Finch,
Bookreporter
... nothing short of a big surprise in a genre where so many dystopic novels fail because they simply rearrange the same old post-apocalyptic elements without creating any new meaning from them ... Those familiar background paradigms are there in mind-numbing abundance, practically choking every page. In fact, their effects are as thick as the toxin-permeated air that King predicts most of North America will be breathing by the late 21st century ... King makes it strangely compelling by concocting a barely credible mission that can only be accomplished by traveling great distances through unsafe territory. And he assembles such a messed-up crew of characters to do it that you keep on reading just to see how badly they’ll fail. To add more uncertainty to the effort, only two of the four are human ... behind more than 400 pages of energetic, witty and grotesquely picturesque writing, the scariest thing is that King really 'knows the stuff' in all the areas where a country that once led the free world could come apart at the seams. Some folks, from within and without, fear that’s already happening.
Read Full Review >>
Pan Adam Morgan,
The A.V. Club
FKA USA is exhausting. Instead of telling a story, the author packs every page with as many convoluted world-building references and one-liners as possible. It feels less like a novel and more like a movie treatment crowdsourced by studio executives, who then passed the writing off to one of their teenage nephews ... the 'jokes' are more Adam Sandler than George Saunders ... the truth is—despite a great cover and a clever premise—there are Wikipedia pages more narratively compelling than FKA USA. The map on the endpapers is the best part of the book.
Read Full Review >>
See All Reviews >>
SIMILAR BOOKS
Fiction

The Women Could Fly
Megan Giddings
Rave
What did you think of FKA USA?
© LitHub | Privacy