Fate of the Fallen 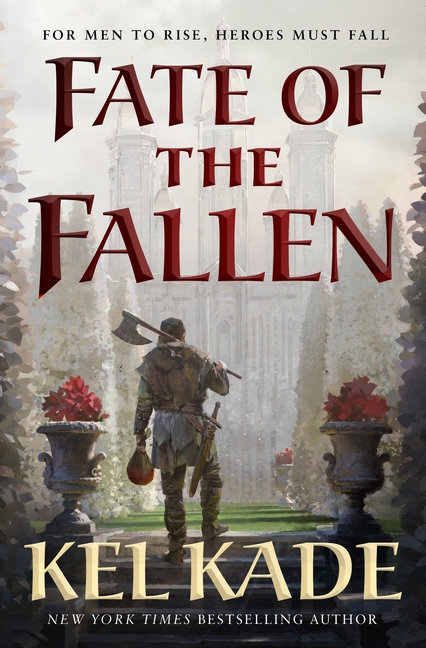 Everyone loves Mathias. Naturally, when he discovers it's his destiny to save the world, he dives in head first, pulling his best friend Aaslo along for the ride. However, saving the world isn't as easy, or exciting, as it sounds in the stories.

What The Reviewers Say
Positive Alex Bowditch,
Bookreporter
... various clashes of will allow Kade to interject necessary humor and levity into what is otherwise a rather dark concept. This interplay makes it a joy to read about how her peculiar characters fare in truly unpredictable situations ... the story takes a number of surprising twists and turns, ending on an infuriatingly, tantalizingly good cliffhanger. I am ready for the next book in this bizarre gem of a series, and excited to say that I have absolutely no idea where it will go from here. I can’t wait to find out.
Read Full Review >>
Mixed Martin Cahill,
Tor.com
There is a great idea at the core of Fate of the Fallen, and that is mostly what sustains this novel. To play so drastically with the rather bloated trope of the chosen one by murdering him in the very first act is a rather confident move, and quickly adds adrenaline to a novel slow to get moving. And that idea, that whatever cataclysm is to come can now not be averted, fuels a lot of the interesting relationships in this book ... Aaslo’s personal journey is a delightful read ... Unfortunately, many parts of Fate of the Fallen fail to hold up to the excitement of the core premise. Without really knowing who the chosen one is, we don’t have any investment in his loss. Without really understanding what the prophecy and this supposed world-destroying calamity is, we don’t feel the consequences of his demise. As Aaslo begins his quest, we get drips and drabs of information, but so much is thrown at the reader at once regarding worldbuilding, cosmology, godhood, mages, side characters, and more, that there’s no chance for any of the stakes to sink in before we’re whisked away. While I believe being vague about stakes is being done on purpose, it holds the reader back from any investment in the story or the characters ... Without clear stakes, either on a character or a worldbuilding level, then all the reader is doing is watching characters go from place to place being as confused as they are. It’s a shame, because Kade obviously did a lot of work constructing this world and these characters, and the love they have for them on the page is palpable. I only wish we had gotten a chance to fall in love with them, too, before being thrown in the deep end without a paddle.
Read Full Review >>
Mixed Jane Huang,
Paste
The colorful supporting characters succeed in fleshing out Aaslo’s personal development and bringing witty banter to the journey. Some also deliver fresh takes on tired fantasy tropes ... But others, such as the reluctant prophet and the street rats, fit cookie cutter molds and don’t grow as characters. It’s unclear whether this was a conscious decision on Kade’s part to make them caricatures, but it does cause some interactions to become gratingly repetitive ... The gods’ subplot gets stuck in petty bickering at times, though, which only muddles the urgency of humanity’s ultimate fate ... But when the narrative follows Aaslo and company, the fast-paced action and humorous dialogue keeps the story moving at a brisk pace—except for some uneven plot points. The protagonists are always traveling somewhere, but it’s unclear how they intend to save the world. Kade punctuates the story with multiple high-stakes action sequences and battle scenes, but it’s difficult to point to a single climactic event with a resolution. Even the ending resolves too quickly ... may have a somewhat meandering plot, but its characters and clever dialogue make it a fun reimagining of a tired fantasy trope.
Read Full Review >>
See All Reviews >>
SIMILAR BOOKS
Fantasy

40
Alan Heathcock
Positive
What did you think of Fate of the Fallen?
© LitHub | Privacy