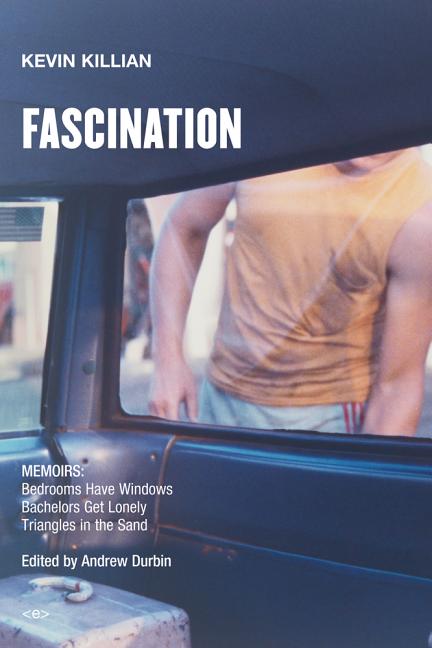 From one of the founders of the New Narrative movement in San Francisco, this three-part memoir explores gay life in 1970s Long Island.
Rave
Based on 4 reviews

What The Reviewers Say
Rave Shiv Kotecha,
The Believer
In his new triad of memoirs, Kevin Killian replaces the epiphanic mode of storytelling with something less knowable—a gorgeous turbulence, rather than some dramatic self-discovery. As with Killian’s other writing, informed by the poetics of 'New Narrative,' the narrator in Fascination is both uncannily like its author, and someone curiously, entirely, fabulated ... Killian not only disturbs how personalities, in fiction, can be reassembled, but also the ways in which they can be remembered ... the stories in this collection come together as counterfeited pastiche, or as montage. Autobiography is not, in Killian’s prose, a simple telling, but is rather a framework that can be promiscuously, repeatedly retooled ... with Fascination, we get a set of stories that in their digressiveness are, otherwise told straight: historical specificity, here, comes as a process of wandering, of not knowing what’s in front of one’s own eyes, not deciding to move forward but getting there anyway ... The radicality, and the necessity of Killian’s Fascination comes from its willingness to yoke those two, reality and the book, together.
Read Full Review >>
Rave Andrew Durbin,
The Paris Review
Innocence is punctured by Killian’s increasing alcoholism, by fear of AIDS, by depressive episodes of writerly self-deprecation...and the progression from Smithtown to Minna Street is marked by the violence of sex and depravity of desire. Each crisis of timing or catastrophe of personality arrives as its own Sword of Damocles hanging in the air above him, ever ready to rend fragile happiness ... In situating themselves in memory’s drift, its blur, Killian’s memoirs remain as vibrant now as they did in the late eighties, palpably alive with sex and politics, music and poetry. Killian’s past is strange, drunken, a little lost, but it belongs to our present as a handy record for those of us who need a reminder that sometimes a direction can be found in the reckoning.
Read Full Review >>
Rave Corley Miller,
Los Angeles Review of Books
Together, Fascination is sometimes scattered, sometimes frustrating, but ultimately reads as historically important and textually delightful. It’s easy to see why people love Kevin Killian so much ... Killian’s is a considerable associative impulse ... Killian’s passage through the lapidary present into fantasy and finally self-apperception offers the reader something deeper than mere ex-indictment. It’s a mimesis of the process of recovery: after the goosebumps comes a great deal of imaginative labor and an ultimate arrival at a more-or-less functional adulthood, one cognizant of...but not defined by...the pains of the past. There’s also a sly action on the epiphanic—a queering of the old-narrative approach to self-discovery ... the epiphany arrives not in a single unitary story but over the course of decades, continents; the finally realized self isn’t an alarming instability but a scarred and laborious serenity ... Characteristic, too, is the sudden change of tone in the prose. Killian’s sentences lope along in flat descriptives for whole paragraphs, whole pages, before tightening into arresting verbal images ... 'Kevin Killian' as both a human being and a set of textual strategies is still visibly under construction in these pages, partly assembled by the dramatized dalliances but also continuing to assemble himself in the process of writing ... The case for Fascination, then, is a case for a kind of communal or generational Künstlerroman—a story, to borrow from the Gertrude Stein everyone was reading, about how Americans are made.
Read Full Review >>
See All Reviews >>
SIMILAR BOOKS
LGBTQ Stories

All Down Darkness Wide: A Memoir
Seán Hewitt
Rave
Essays

This Body I Wore: A Memoir
Diana Goetsch
Rave
What did you think of Fascination: Memoirs?
© LitHub | Privacy