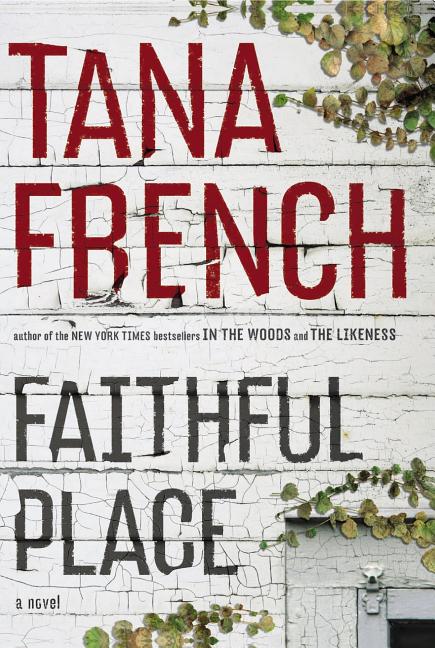 Back in 1985, Frank Mackey was 19, growing up poor in Dublin's inner city, and he and Rosie Daly were all ready to run away to London together. But on the night when they were supposed to leave, Rosie vanished. Twenty-two years later, Rosie's suitcase shows up behind a fireplace in a derelict house on Faithful Place, and Frank is going home whether he likes it or not.

What The Reviewers Say
Rave Sandra Kasturi,
The Globe and Mail
...brilliant ... French takes the peculiarities of the family drama - secrets nesting inside each other like Matrioshka dolls - and weaves them around what is technically a murder mystery ... Although the story arc does finally provide the solution to the murder, that's really only the surface of this finely detailed, compelling and claustrophobic novel. Faithful Place grips the reader in its iron vise, like a dark childhood that won't release us until its inevitable, relentless conclusion has been reached.
Read Full Review >>
Rave Janet Maslin,
The New York Times Book Review
...[an] expertly rendered, gripping new novel ... The first thing that Ms. French does so well in Faithful Place is to inhabit fully a scrappy, shrewd, privately heartbroken middle-aged man. The second is to capture the Mackey family’s long-brewing resentments in a way that’s utterly realistic on many levels. Sibling rivalries, class conflicts, old grudges, adolescent flirtations and memories of childhood violence are all deftly embedded in this novel, as is the richly idiomatic Dublinese ... neither [Frank] nor Ms. French’s most prescient readers can be sure where the suspenseful, ever-twisting Faithful Place is headed. Even after a basic idea of what happened to Rosie has been made clear, this author still has major surprises up her sleeve.Perhaps Ms. French’s training as an actor at Trinity College contributes to her three-dimensional characterizations of every last person in this book.
Read Full Review >>
Rave Alison Flood,
The Guardian
Darkness, tragedy and danger creep and crawl through this novel, not on a grand scale but on a chillingly believable, everyday one ... It's not the crime, or even the solving of it, that makes this one of the best thrillers so far this year – there's no serial killer stalking Dublin's streets, no big 'reveal'. It's French's skills as a storyteller that make Faithful Place stand out, along with her best creation yet, the enjoyably flawed Frank. Here's hoping he – and his chaotic family – show up in future French novels.
Read Full Review >>
See All Reviews >>
SIMILAR BOOKS
Fiction

Act of Oblivion
Robert Harris
Rave
What did you think of Faithful Place?
© LitHub | Privacy