Extreme Conservation: Life at the Edges of the World 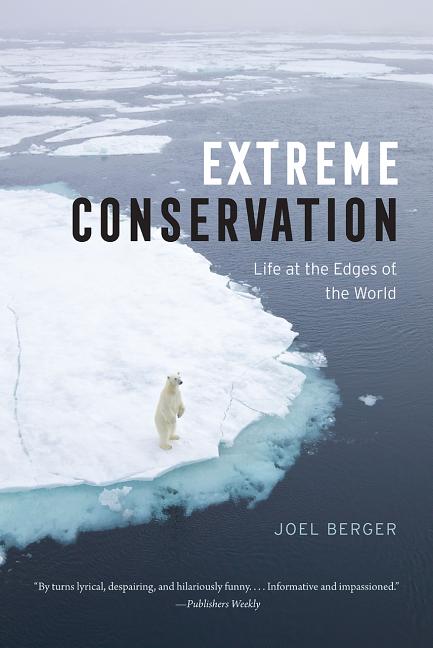 Recounting animals as charismatic as their landscapes are extreme, Berger—Chair in Wildlife Conservation at Colorado State University and a senior scientist with the Wildlife Conservation Society—takes readers to the ends of the earth and back to show the devastating effects of climate change in these remote regions and his own efforts to intervene.

What The Reviewers Say
Rave Tim Flannery,
The New York Review of Books
Joel Berger’s extraordinary new book Extreme Conservation reveals just how hard-won knowledge about various Arctic species is ... Some of Berger’s interactions with musk oxen are deeply disturbing, and it’s greatly to his credit that he admits to the failures as well as the triumphs ... The bleak nature of Berger’s work comes through strongly ... Berger is a committed conservationist whose work has increased the chance that musk oxen, saiga antelopes, takin, and pronghorns will survive. But is such altruism sufficient to induce someone to live a life of freezing discomfort, trauma, frequent failure, and social alienation? ... He is a hero of biology who deserves the highest honors that science can bestow.
Read Full Review >>
Rave Steve Donoghue,
The Open Letters Review
Berger has quite a few enlightening things to say about polar bears in these pages ... He visits places that seem as remote from the climate-change debate as if they were moons of Saturn, but Extreme Conservation makes the point again and again that remoteness is itself frittering away—and was always an illusion in any case ... Berger is a passionate, eloquent guide to the hinterlands and their suddenly endangered signature inhabitant ... Joel Berger here describes a world on the cusp of altering beyond recognition—and the 'extreme conservation' necessary there will soon be necessary everywhere.
Read Full Review >>
Rave Emily Strelow,
The Washington Independent Review of Books
The writing is bright and engaging, borderline 'CSI' thriller at times, like when he encounters a mysterious 'death assemblage' of muskoxen frozen in ice. Berger has written a book about conservation, yes, but there is something here for every type of reader. Berger is a field biologist who aims to see the world from the perspective of the animals he studies ... The section on Bhutan is especially enjoyable, walking the line as the book often does between adventure tale and science writing ... This is not just a book for scientists or environmentalists, but feeling humans of all stripes ... This is a heavy yet humorous read of the most important kind. I challenge any reader capable of perspective and empathy not to feel inspired...and be spurred on to climate action by Berger’s vivid anecdotes of animals at the extreme edges of the world.
Read Full Review >>
See All Reviews >>
What did you think of Extreme Conservation: Life at the Edges of the World?
© LitHub | Privacy