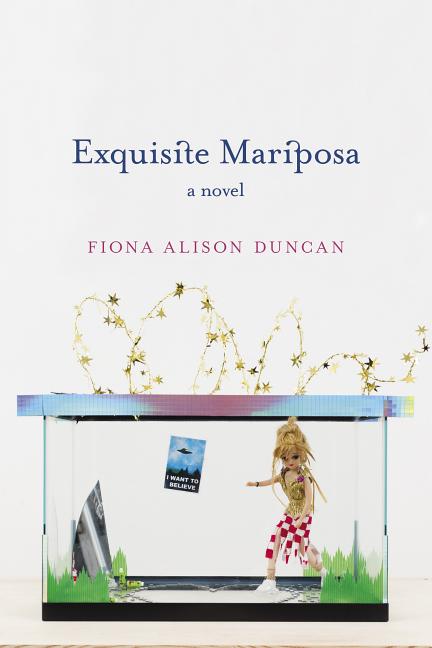 In the aftermath of a reality TV deal gone wrong, Fiona Alison Duncan asks the question, Can you rewrite your life? The answer, her debut novel Exquisite Mariposa, follows a cast of housemates as they navigate questions of art making and economies, breakups and breakdowns, and the internet and its many obsessions.
Positive
Based on 6 reviews

What The Reviewers Say
Rave Elizabeth Block,
The Brooklyn Rail
While hilariously, sadly, and cinematically capturing an American generation of 20-somethings, not to mention a specifically Los Angeles stream of consciousness, it possesses a grounded historical order ... offers delightful contemporary context in which to restructure the ideas such that they can be 'ghosted' by a whole generation of new readers and be entertained without having even read or studied such heavyweights as Lacan, de Beauvoir, Žižek, etc ... The novel subtly pulls the rug out from under the reader ... On the surface, the book seems comic. Yet as you fly through it, the breeze catches buzzing flies ... It’s raw association. It’s not SCUM Manifesto. It’s not New York. It’s not academic. It’s the new Los Angeles. It’s Das Capital in the hands of Louise Hay, with a little Hollywood ReFrame. Because Duncan is a promiscuous observer and reader, the book persists as polymorphous, entertaining, and compassionate.
Read Full Review >>
Rave Rebecca Hussey,
The Foreword Review
... a funny, thought-provoking novel that levels pointed critiques at gender and class inequality and captures what it’s like to be a young person today ... The novel’s ideas and voice are a pleasure ... the narrative’s meandering is held together by Fiona’s acute observations about herself and her world. She is insightful about self-fashioning on social media, and describes the money and career problems of her friends (and generation) with direct, wry wit. She is an amusing and frank narrator ... The novel’s language is freshest and most inventive in its critical, satirical moments ... an incisive story about the struggles of sensitive, artistic young people as they figure out how best to live.
Read Full Review >>
Positive Josh Vigil,
Full Stop
...by turns bildungsroman, stream of consciousness, cultural polemic, L.A. novel (think Eve Babitz meets Kate Braverman), and a tender love letter to her friends ... Duncan’s novel cannot be squarely categorized. Its first bites taste like mainstream contemporary fiction; they go down easy, like candy, or like a Sally Rooney novel. But as you continue to chew — because this novel is chewy — you encounter something quite different. By the end, this novel has spun in all directions, like a piece of thread from your favorite Vetements shirt coming undone ... Ultimately, Duncan proves to be a writer’s writer. There is something to respect in writing the novel that you want — an editor at a major publishing house would probably have had Duncan rework much of the latter part of the novel, and would have pushed her to have the one major plot device — the reality TV show deal — become a more dramatic arc, stripping Exquisite Mariposa of its more renegade traits. But instead, we have a bulldozer of a novel that is unafraid of tossing a wide, niche net, then letting the net self-immolate.
Read Full Review >>
See All Reviews >>
SIMILAR BOOKS
Fiction