Evidence of V: A Novel in Fragments, Facts, and Fictions 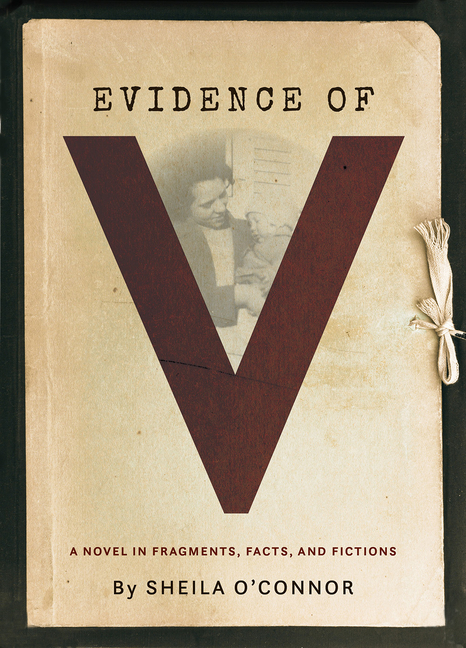 In a blend of fact and fiction, including family secrets, documents from the era, and a thin, fragmentary case file unsealed by the court, novelist Sheila O'Connor tells the story of V, a talented fifteen-year-old singer in 1930s Minneapolis whose pregnancy by a nightclub owner led to her incarceration for "immorality" in an abusive institution.

What The Reviewers Say
Rave Marion Winik,
The Star Tribune
To the blend of fact and fiction we expect from historical fiction, Sheila O’Connor’s experimental novel Evidence of V adds poetry and memoir, and arrives at a cohesive and moving portrait of the grandmother she never knew. The novel’s unusual approach to storytelling—'Fragments, Facts and Fictions'—comes to seem perfectly suited to its topic ... O’Connor builds a collage of imaginary vignettes and fascinating/horrifying historical documents that brings to life a lively, talented girl and her bitter fate ... In addition to the adult audience it deserves, I hope this book gets passed around by girls in and out of such places, its literary magic restoring to them their history.
Read Full Review >>
Positive Esa Grigsby,
Entropy
With each page comes an awakening and a documentation of the author’s personal struggle to find her family’s truth, the words piece together to create a vivid quilt of O’Connor’s thoughts and ideas surrounding her genetic history. During their time with this book, the reader will, however, feel a lack of depth in plot and character. A trait that restricts the book’s ability to transcend itself as a story, but a trait that allows and propels, compels the book to transcend itself as socio-political art. The information we think we want as readers of literature, the information we think we need to be satisfied with the story as a story, we never get. O’Connor makes sure of this because she never gets it either and no one can give you something they don’t have to begin with. No one gets it and we’re left having to fill in the blanks left over from O’Connor’s filling in the blanks and what even happened really, we’re wondering? That’s the question and the problem as one ... All of this is conveyed through an engaging blend of historical documents, family stories, well-timed and thought-provoking poems and one-liners, and extrapolated imagination. O’Connor’s background as a writer, teacher, and academic is fully evident in the composition and orchestration of it all. As she writes, she calls on us to think and reflect, to ask questions even if it’s just to fill the void left behind by historical silence ... At best, this book will spark a cascade of curiosity, anger, and a similar hunger for knowledge as is palpable in O’Connor herself. Evidence of V has synthesized the existing facts and data and infused them with the author’s raw emotion, emotion—the catalyst of change and the beginning of an answer.
Read Full Review >>
Rave Publishers Weekly
In riveting juxtaposition of prose and historical research, O’Connor recreates an almost Atwoodian reality ... V’s harrowing tale highlights the stark reality of an all-too-recent past where victims of sexual abuse were scapegoated for their perpetrator’s crimes. O’Connor’s engrossing, powerful narrative will appeal to those who enjoy the work of Amy Bloom.
Read Full Review >>
See All Reviews >>
SIMILAR BOOKS
Fiction

Jeeves and the Leap of Faith
Ben Schott
Mixed
What did you think of Evidence of V: A Novel in Fragments, Facts, and Fictions?
© LitHub | Privacy