Everything I Never Told You 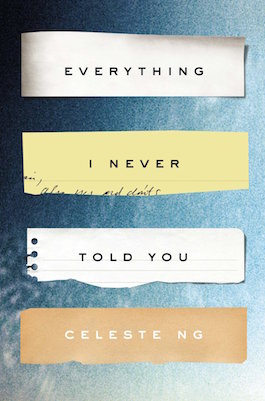 Celeste Ng's debut novel begins with the death of a teenage girl and then uses the mysterious circumstances of her drowning as a springboard to dive into the troubled waters beneath the calm surface of her Chinese-American family.

What The Reviewers Say
Rave Hector Tobar,
The Los Angeles Times
Everything I Never Told You, Celeste Ng's excellent first novel about family, love and ambition, opens with a death ...can't help but feel a little like a mystery, and the pages that follow do reveal, gradually, the cause of Lydia's death. At its core, though, Ng's book is a conventional, domestically centered novel about an American family ...despite the Lees' interracial status, issues of ethnic and cultural identity are largely secondary to Ng's main ambition here: probing the emotional wounds that have scarred the family ...Ng's portrait of the relationship between Lydia and Marilyn, especially, feels true and fully realized. It's also heart-wrenching ... an engaging work that casts a powerful light on the secrets that have kept an American family together — and that finally end up tearing it apart.
Read Full Review >>
Positive Clea Simon,
The Boston Globe
What this novel concerns itself with is both the back story, showing us how this tragedy came about, and the aftermath, as Lydia’s parents, brother, and sister try to move on ...Ng starts with the family’s history, laying the groundwork for Lydia’s death. She then moves seamlessly into the weeks beyond, excelling in her sensitive and detailed portraits of grief... From the beginning, we are made to feel the tension in the Lee household, and the triggering crisis arrives with a kind of enervating inevitability ... What we don’t see, until it is too late, is the toll this sacrifice demanded ...a beautifully crafted study of dysfunction and grief. Yes, it may miss a few notes, but the ones it does play will resonate with anyone who has ever had a family drama, never mind a gift.
Read Full Review >>
Positive Steve Novak,
The Minneapolis Star Tribune
In her first published novel, Celeste Ng peels back the layers of a grieving family reeling from the loss of their teenage daughter ...both a narrative of a family's attempt to cope with loss, and a mystery. The body of the Lees' middle daughter, Lydia, was found in a lake, and it is unclear if her death was an accident or a suicide. Ng divides the chapters between past and present ... Although bright, Lydia was not the potential Rhodes scholar that Marilyn wanted her to be ... From here, Ng shows the familiar spiral of teenage failure slipping into lassitude and apathy ... It is to Ng's credit that it is sometimes difficult for the reader to keep going; the pain and unhappiness is palpable. But it is true to the Lees, and Ng tells all.
Read Full Review >>
See All Reviews >>
SIMILAR BOOKS
Literary

Please See Us
Caitlin Mullen
Rave
What did you think of Everything I Never Told You?
© LitHub | Privacy