Every Vow You Break 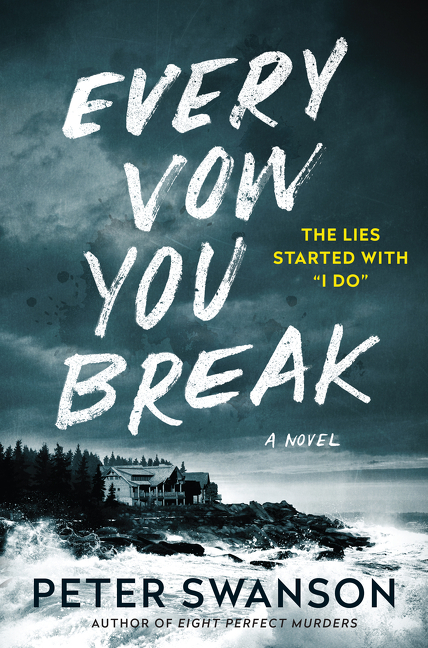 A new bride's idyllic honeymoon becomes a nightmare when a man from a recent one-night stand shows up. From the acclaimed author of Eight Perfect Murders.

What The Reviewers Say
Positive Malcolm Forbes,
The Star Tribune
Every Vow You Break is not a murder mystery like Swanson's last book, but rather a psychological thriller. Some of the tropes deployed to achieve those thrills feel shopworn (an isolated retreat with no wireless and cell service?) but for the most part there is more than enough going on to keep us gripped and absorbed. Just when we think we have an idea of what Abigail is up against, Swanson pulls the rug away from under us. Strange events give way to sinister revelations and chilling encounters. The last act cranks up tension to the breaking point. Sit back, suspend all disbelief, and watch those pages fly by.
Read Full Review >>
Positive Tom Nolan,
The Wall Street Journal
... dramatic things are happening left and right ... Mr. Swanson...has a talent for gradually, disturbingly shifting his characters’ perception of what’s going on ... Mr. Swanson’s shape-shifting saga is reminiscent, by turns, of such foreboding films as Vertigo, Fatal Attraction and The Wicker Man. Ultimately, Every Vow You Break reveals itself to be a violent melodrama, one which the author sees surehandedly through to a satisfying conclusion.
Read Full Review >>
Positive Norah Piehl,
Bookreporter
... a lot like a Hitchcockian thriller ... a vivid and cinematic atmosphere that amplifies Abigail’s steadily mounting dread. Dedicated thriller fans likely will pick up on some of the clues before they’re revealed, but almost certainly will be surprised by one or more of the many twists and turns that Swanson employs. If you’re headed to a wooded cabin or a beach resort this spring or summer, Every Vow You Break would be a perfect companion. Just be prepared to check the locks and windows while you’re there!
Read Full Review >>
See All Reviews >>
SIMILAR BOOKS
Fiction

The Lamplighters
Emma Stonex
Rave
What did you think of Every Vow You Break?
© LitHub | Privacy