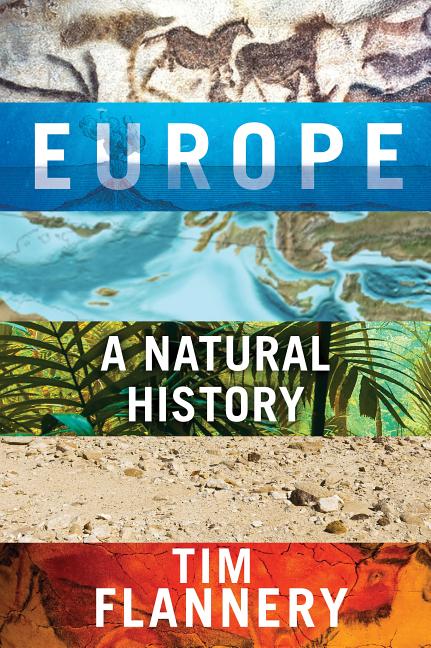 What The Reviewers Say
Rave Natalie Angier,
The New York Review of Books
...[a] deeply satisfying and splendidly written survey of the geological, zoological, climatological, and biophilosophical roots of that heavyweight set of coordinates we call Europe ... Flannery’s focus on Europe serves as a handy storytelling device, allowing him to convey a tremendous amount of natural history while maintaining a plot and point of view. Europe is our hero; watch our hero grow. Scenes are vividly, sensorily drawn. You feel the warmth of the ancient Tethys Sea, and you want to scoop up the single-celled Nummulites that crept along the Tethys floor like mobile coins, Methuselah’s spare change, sucking up detritus over a lifespan of a hundred years...It’s startling to realize how teeming and diverse Europe’s megafauna used to be, a kind of Serengeti on the Seine.
Read Full Review >>
Positive Derek Turner,
The Irish Times
...bold and brilliant ... [Flannery] drills down through nameless, numberless layers, to expose a chthonic continent – when tectonics turned, seas dried and refilled, and centillions of alien life forms moved urgently across an indifferent Earth 'without form, and void', where 'darkness was upon the face of the deep'. The world’s first coral reefs may have formed here, the first moles sifted soil, and hills were made by snails, while the earliest hominids came out of Europe before humans came out of Africa. He expertly conjures up successive exotic ur-Europes out of rare petrifactions and the cultures of the human centuries ... Flannery looks far forwards as well as back, to see how pre-prehistory might inform tomorrow – advocating updating taxonomy and laws on endangered species, restoring biomass, and sensitive rewilding.
Read Full Review >>
Positive Kirkus
...a fascinating geological and natural history of Europe, from its origins as a tropical arc of islands to the present, as the world faces the challenges of rapidly rising temperatures ... [Flannery] depicts in colorful detail the variety of wildlife inhabiting the islands along with dinosaurs, including primitive mammals, and strange creatures, such as pythonlike snakes, terrestrial crocodiles with serrated teeth, and 'large side-necked turtles'... An illuminating natural history and warning for the future.
Read Full Review >>
See All Reviews >>
What did you think of Europe: A Natural History?
© LitHub | Privacy