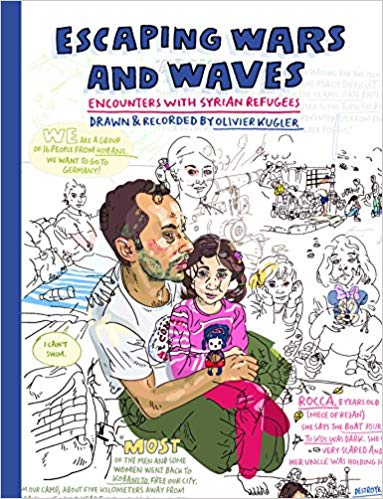 Based on interviews and photographs by the author and illustrator during his work with Doctors Without Borders, this winner of the Jury Prize from the 2018 European Design Awards documents the experiences of Syrian refugees housed in camps in Iraqi Kurdistan, Greece, France, Germany, Switzerland, and England.

What The Reviewers Say
Rave Molly Crabapple,
The New York Review of Books
This recreated sketchbook is artistically masterful ... each page has all the energy of an image drawn on the spot. Kugler’s line is astute, sinuous. He pulls the main characters out with color, but lets the background details overlap and congeal. He records the half-drunk Arabic coffee, the portable heater, the eloquent detritus of camp life. At their best, sketchbooks like Kugler’s make readers feel as if they are sitting beside the artist—watching the refugees climb onto the beach of the Greek island of Kos after crossing the Aegean from Turkey, or smelling the tea sold by a vendor in an Iraqi refugee camp ... Kugler’s sprawl of testimony shows how these individual histories accumulate, blur, and shuffle.
Read Full Review >>
Rave Megan N. Liberty,
Los Angeles Review of Books
... extraordinary ... Kugler frequently places people at the center of busy pages, their faces caught mid-conversation, arms descriptively raised in dialogue. These depictions open up to us, welcoming us into the densely packed and complex lives that the refugees relate in their stories ... This ability to put the reader in the midst of events is an essential quality of effective graphic journalism, which often makes visible otherwise invisible personal narratives ... Kugler’s style brings us back to the personal lived experiences of the families, young people, and elders whose lives have forever been displaced by revolution and relocation.
Read Full Review >>
Positive Dominic Umile,
Hyperallergic
In portraying these conversations, Kugler offers very detailed illustrations of his expressive interviewees ... he's meticulous about artful head scarf textures or graphic T-shirts. His thin inked line is sometimes doubled-up, so that shadow-like outlines appear around otherwise finished renderings of his subjects’ arms and legs. It suggests motion, but it’s an effect that also recalls double-exposed photos, which is where Kugler’s journalism begins ... Kugler utilizes captions, oversized header type, and word balloons, too. While the work isn’t always labeled as such and is far more venturesome than what is being produced at mainstream comics publishers, Escaping owes as much to the tradition of comics and sequential art as it does to journalism ... The animated pages in Escaping read like composites of several images, where physical geography is represented fractionally and sitting subjects look to be in motion. The story retains a sketchbook-like sensibility rather than that of formal, finalized storytelling. It’s fitting: Everyone is on the move. Their stories are far from over, and some are still waiting to be told.
Read Full Review >>
See All Reviews >>
SIMILAR BOOKS
Award Winners 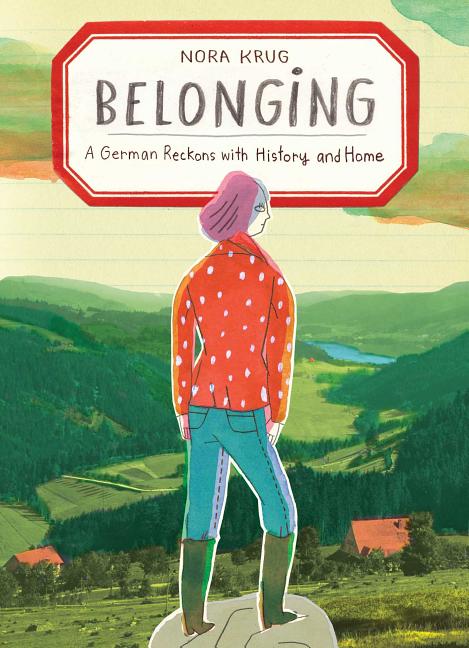 Belonging: A German Reckons with History and Hom…
Nora Krug
Rave
What did you think of Escaping Wars and Waves: Encounters with Syrian Refugees?
© LitHub | Privacy