Empty the Pews: Stories of Leaving the Church 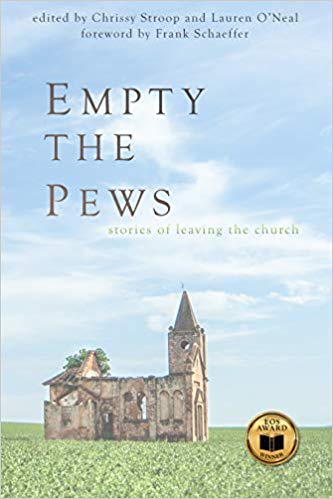 Chrissy Stroop and Lauren O’Neal collect original and previously published pieces about leaving Christianity. Examining the intersections of queerness, spiritual abuse, loss of faith, and the courage needed to leave one’s religious community, these two social critics use a diverse collection of personal essays by apostates and survivors of religious trauma to boldly address the individual experiences and systemic dysfunction so common in conservative churches. Winner of the 2019 Eos Award.
Positive
Based on 3 reviews

What The Reviewers Say
Mixed Megan Marz,
The Washington Post
While many of the essayists testify to having felt isolated, this collection makes clear that...they were part of a community they did not know existed. Each time I read a piece in which the writer had no one to talk to about their dissipating faith, or the abuse they were enduring, I wished they could reach through the pages and into another essay, where they might find relief or solidarity. Of course, that’s exactly what this collection enables them, and their readers, to do. Though most of the essays are decidedly personal, rarely (and only briefly) veering away from individuals’ stories to describe their social or political context, O’Neal and editor Chrissy Stroop have transformed them here into a document of collective pain and loss ... As in any successful collective project, the weaker entries feel less so, since they are contributions to a valuable whole. And the stronger entries do not stand out as much as they might if you read them alone ... But the essays’ shared trajectory of exodus leaves such a strong impression that these distinctions might fade into the background for those who read the book quickly. At times, this trajectory even steamrolls Christianity and, by extension, religious belief into a one-dimensional phenomenon.
Read Full Review >>
Positive Kirkus
A timely collection of essays by a diverse group of people who’ve left the religious right ... The book should be especially praised for its inclusion of a wide range of perspectives. The authors of the nearly two dozen essays here include multiple New York Times-bestselling writers, popular bloggers, artists, and academics; they include white men, feminists, African Americans, members of the LGBTQ community, Protestants, and Catholics ... Overall, this is a profound, well-written collection that will appeal not just to 'exvangelicals' and other critics of the religious right, but also introspective fundamentalists who seek explanations for their dwindling numbers ... An incendiary but profoundly moving deconstruction of conservative Christianity.
Read Full Review >>
Positive Publishers Weekly
While some entries are overly brief or serve as just-the-facts recitations with little reflection, many others, such as Carmen Maria Machado’s story of a toxic friendship with a youth pastor...stand out for their lyricism and lucid introspection. This collection serves as an important public testimonial of those who have walked away from religion, and will surely inspire others to tell their stories.
Read Full Review >>
See All Reviews >>
What did you think of Empty the Pews: Stories of Leaving the Church?
© LitHub | Privacy