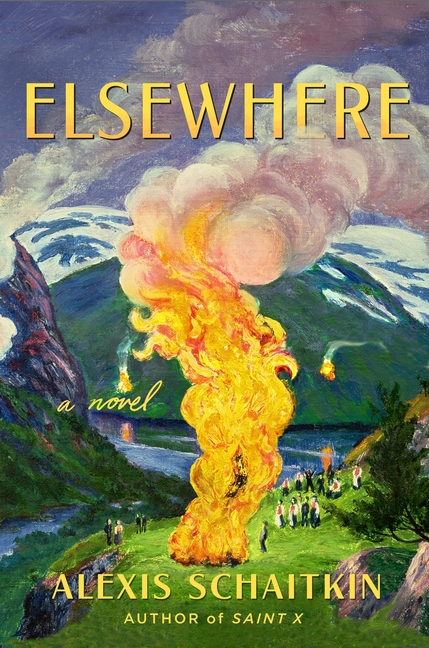 Vera, 16, helps her widower father run the town's photoshop. As she and her peers traverse the thorny path of adolescence, they're all too aware of the possible fate waiting for them that plagued their mothers, all of whom vanished when they were little girls for no clear or consistent reason. Then a stranger named Ruth visits from elsewhere. From the author of "Saint X."

What The Reviewers Say
Positive Marie-Helene Bertino,
New York Times Book Review
... joins the recent roster of impressive novels that have employed speculative elements to examine new motherhood ... Without any signifiers of location and time, Schaitkin’s narrative seems to reach for a sense of universality, and intentionality: as though every element of this carefully crafted theater has been placed there for a reason. It’s not what Elsewhere elides but what it preserves from our world that is the most telling ... Schaitkin chooses to leave intact our culture’s misogyny and reproductive pressures. Readers might long for a sympathetic, perhaps child-free outlier to reimagine, this female plight and bring some semblance of resolution into focus. But such an anomaly never materializes, and even strangers still reinforce the status quo when it comes to gender roles. Even as the plot completes a satisfying loop, Vera maintains the prejudices she had at the start and, most unusually, never questions her own certain motherhood. Perhaps this is the real speculative element: a mother with no traces of ambivalence ... A welcome addition to a shelf of speculative fiction about the joys, failures and metamorphoses involved in having a child, Elsewhere asks: Is motherhood, like the town itself, meant to be a featureless place, best experienced under a haze of collective brainwashing?
Read Full Review >>
Positive Suzanne Berne,
Washington Post
Schaitkin is at her sharpest and darkest when depicting the anxieties and self-justifications of new mothers, their fears of being judged as unnatural or inept, particularly by other mothers, the standard of maternal excellence being as impossibly high in this misty place as everywhere else ... Although, frankly, the reader also struggles to understand the lessons of the affliction or why no one questions it. Even when Vera becomes an outsider herself, with a chance to gain some perspective, she doesn’t seem fully awake to the affliction’s weirdness or grow suspicious about its origins. (The local men, for instance, seem a bit too resigned to the possibility of losing their wives.) Like those oppressive clouds, the narrative is at times opaque, and perhaps some occasional humor would have provided a clarifying breeze. Still, at this particular moment, a novel that dramatizes the perils of motherhood, and challenges the idea that it should be all-important, could not be more relevant.
Read Full Review >>
Positive Julia Kastner,
Shelf Awareness
... Schaitkin creates a chilling, mesmeric world ... the village at its heart and the options of a larger world will stick with readers long after the final page ... unsettling, thought-provoking and lushly detailed, a memorable inquiry about attachments to place and to family, and what happens when a person has to choose between her family and herself.
Read Full Review >>
See All Reviews >>
SIMILAR BOOKS
Fiction

The House of Fortune
Jessie Burton
Mixed
What did you think of Elsewhere?
© LitHub | Privacy