Elizabeth Taylor: The Grit & Glamour of an Icon 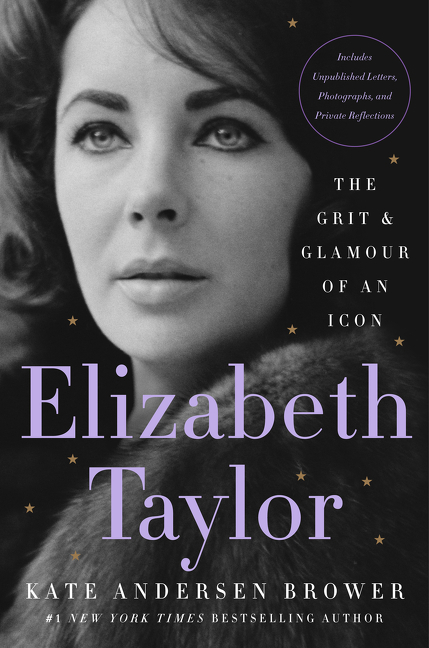 Including unpublished letters, photographs, and private reflections, this is the first authorized biography of the most famous movie star of the twentieth century, Elizabeth Taylor.

What The Reviewers Say
Pan Ty Burr,
The Wall Street Journal
How do you contain such a person in the pages of a book? It may not be possible; in any event, Kate Andersen Brower hasn’t done it. The effort is there: Scrupulously researched, Elizabeth Taylor: The Grit and Glamour of an Icon weighs in at nearly 500 pages ... Really, she’s a biographer’s dream. Then why does Elizabeth Taylor: The Grit and Glamour of an Icon disappoint so sorely? The book is a bedazzled march through a life of excess that becomes a slog of wide-eyed data points and insights that aren’t especially insightful ... The text has been researched and written but not shaped. Perhaps most problematically, Ms. Brower...writes from the point of view of a fan ... The book is more successful at conveying the often-frightening strangeness that comes with being an object of mass idolatry...and with the humiliations visited on a woman desired by famous men ... That breathlessly banal style of writing...runs throughout Elizabeth Taylor: The Grit and Glamour of an Icon and quickly turns numbing. The fawning tone does a disservice to any reader who truly wants to comprehend this larger-than-life figure or understand what she signified to her era ... Here is the story of one of the most absurdly dramatic, over-the-top lives of the 20th century. And it is dull.
Read Full Review >>
Pan M. G. Lord,
The Los Angeles Times
When I sat down with Kate Andersen Brower’s Elizabeth Taylor: The Grit & Glamour of an Icon, I expected to read a biography — a book that would offer both argument and documentation. But I was hard pressed to find any organizing principle beyond chronology and bursts of indiscriminate admiration, and what passed for endnotes dismayed me. They did not reference specific pages. Each chapter was noted with a jumble of interviewees and books, but no precise attribution ... This 512-page object appears to have been miscategorized. Brower is obviously not Robert Caro. She does excel, however, as a fangirl, which is not terrible. Elizabeth Taylor is a rambling commemorative, the sort of tribute album that you get at a memorial service ... I can’t help wondering what might have been. Brower had a huge advantage over Taylor’s many previous biographers: the cooperation of Taylor’s family and access to the documents they guarded ... Brower tries to shove Taylor’s many identities — child star, substance-abuser, serial marrier, multimillionaire, mistreated political wife, tax exile — into a single volume. This doesn’t work. It leads to flatly descriptive narration ... Although the book’s star-flecked cover is as sparkly as the jewels Taylor collected, it leaves the reader feeling sad ... I wish Brower had been more respectful of the access she was given — not through lavish thanks or wide-eyed praise, but by approaching her project and her sourcing with more verve and rigor ... Nothing is sadder, after all, than a missed opportunity.
Read Full Review >>
Pan Rupert Christiansen,
The Telegraph (UK)
None of this is exactly new: it has long been mythologised. Authorised by Taylor’s family, Andersen Brower has been granted access to letters and intimate records, but these yield incidental gossip rather than significant revelations. Nor is anything of critical interest said about the relevant movies, several of which are simply ignored. Brower’s showbiz prose style – too many clichés, too many vacuous quotes – doesn’t help either ... The book’s biggest flaw, however, is the maudlin sentimentality that colours the treatment of Taylor’s final year.
Read Full Review >>
See All Reviews >>
What did you think of Elizabeth Taylor: The Grit & Glamour of an Icon?
© LitHub | Privacy