Eligible: A modern retelling of Pride and Prejudice 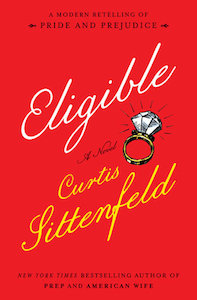 A modern retelling of Jane Austen's Pride and Prejudice set in New York City, focusing on Liz, a magazine writer in her late 30s.

What The Reviewers Say
Rave Sarah Lyall,
The New York Times Book Review
No one writes with Austen’s particular sensibility, and no one would really want to; she was perfectly of her time. But Sittenfeld is the ideal modern-day reinterpreter. Her special skill lies not just in her clear, clean writing, but in her general amusement about the world, her arch, pithy, dropped-mike observations about behavior, character and motivation. She can spot hypocrisy, cant, self-­contradiction and absurdity 10 miles away. She’s the one you want to leave the party with, so she can explain what really happened.
Read Full Review >>
Pan Ron Charles,
The Washington Post
As a long game of literary Mad Libs, Eligible is undeniably delightful. Sittenfeld’s cleverest move may be working a reality-TV dating show into her story. What might seem like a bit of pandering to pop taste is really a feat of metafictional satire ... It helps tremendously that Eligible moves along so breezily, but changing the scenery and the props isn’t sufficient to modernize Pride and Prejudice, even if such a thing could (or should) be done. We crave a witty vision of our culture commensurate with Austen’s of hers. Too often Eligible delivers humor that’s merely glib or crude.
Read Full Review >>
Pan Michiko Kakutani,
The New York Times
Although there are glimpses of Ms. Sittenfeld’s storytelling talents in the novel’s opening chapters, “Eligible swiftly devolves into the glibbest sort of chick lit; it reads less like a homage or reimagining of Austen’s classic than a heavy-handed and deeply unfunny parody ... It’s not just that many of Ms. Sittenfeld’s characters often seem more like the Kardashians than Austen heroines, but that the entire tone of this novel feels off: The layered satire and irony in Pride and Prejudice have been replaced here with high-decibel mockery, just as Austen’s sense of irony has been supplanted by sophomoric jokes.
Read Full Review >>
See All Reviews >>
SIMILAR BOOKS
Fiction

Fake Accounts
Lauren Oyler
Positive
What did you think of Eligible: A modern retelling of Pride and Prejudice?
© LitHub | Privacy