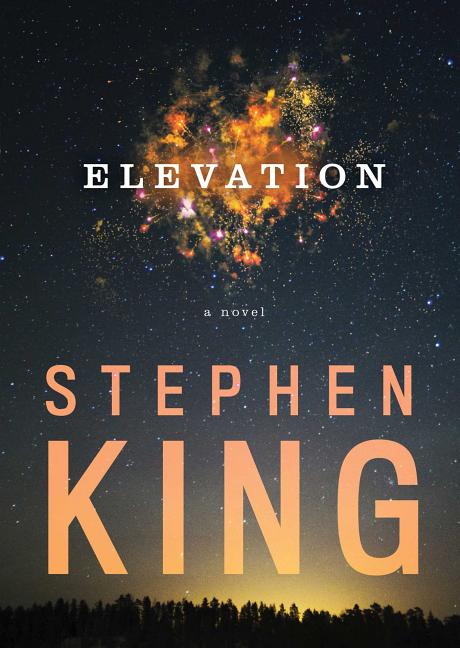 An eerie-but-sweet new novel from the master of American horror. In the small town of Castle Rock, Scott comes down with a mysterious illness that causes him to lose weight, and is engaged in a low grade—but escalating—battle with the lesbians next door whose dog regularly drops his business on Scott’s lawn. When Scott finally understands the prejudices they face—including his own—he tries to help.

What The Reviewers Say
Rave Donna Seaman,
Booklist
A sharply imaginative, sweetly funny, tenderly uplifting fable. Divisive times call for unifying tales. Written in masterly King’s signature translucent style and set in one of his trademark locales, this uncharacteristically glimmering fairy tale calls unabashedly for us to rise above our differences ... Succinct, magical, timely.
Read Full Review >>
Positive Gilbert Cruz,
The New York Times Book Review
There’s nothing really light about Stephen King ... But...King has delivered a near-weightless tale. I read Elevation in less time than it took to watch last year’s movie adaptation of It. Weight is the preoccupation of this slim novel, which at first feels like a riff on one of King’s earliest works (written under a pseudonym), Thinner ... But King also has in mind the weight of close-mindedness and prejudice ... One of the story’s most gripping moments hinges on the results of a Thanksgiving Day Turkey Trot. It’s all pretty small ... There’s more than a hint of the 'holiday novella'—so popular in the romance genre—to Elevation, and I imagine many fans would be satisfied if King settled into a late career of one heavy meal and one amuse bouche every year. While the final pages are reminiscent of one of his son Joe Hill’s best short stories (to mention the title would give away too much), there’s a sweetness that feels like something new for King. It’s heavy out there right now. Here’s something that’s not.
Read Full Review >>
Positive Ron Charles,
The Washington Post
You’ll chew through a few chapters of Elevation before realizing there is no razor blade in this caramel apple. King’s new novel is trick and treat, a poignant parable of prejudice overcome and resentment healed ... And yet this novel may repel stridently progressive readers as much as it does staunchly conservative ones — which, I suspect, will not trouble King too much ... [King] has written a slim book about an ordinary man in an extraordinary condition rising above hatred and learning to live with tact and dignity. That’s not much of a Halloween book, but it’s well timed for our terrifying season.
Read Full Review >>
See All Reviews >>
SIMILAR BOOKS
Coming Soon

Either/Or
Elif Batuman
Rave
What did you think of Elevation?
© LitHub | Privacy