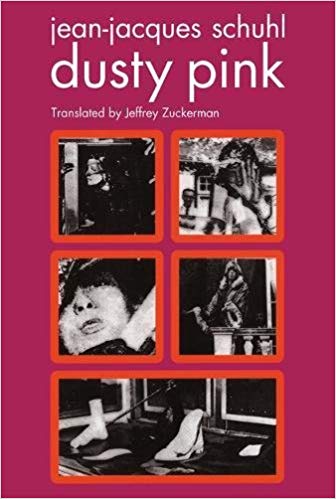 A cult classic in France, the first translation of a novel that captures a subjective stroll through an underground, glamorous Paris.
Rave
Based on 2 reviews

What The Reviewers Say
Rave Hannah Stamler,
Bookforum
If Millennial Pink captures something of 2018’s youth zeitgeist, then according to French author Jean-Jacques Schuhl, winner of the 2000 Goncourt Prize for his novel Ingrid Caven, the late 1960s and early 1970s might be characterized as the years of 'dusty pink.' His cult classic of the same title, first published in 1972 as Rose poussière, and now available in its very first English translation, is a patchwork of his musings and meditations on the London and Parisian undergrounds of that era, formed through vignettes and prose poems that blend fact, fiction, and fantasy ... Translator Jeffrey Zuckerman has done an admirable job of making Schuhl’s jagged, reference-laden prose comprehensible and meaningful to English-language readers, ensuring that Schuhl’s voice comes across in all of its peculiar uniqueness, rhythm, and loveliness.
Read Full Review >>
Positive Katherine Beaman,
Commonplace Review
Dusty Pink, a forthcoming release in English translation, is a cluttered, chaotic text which meets you only as far as you’re willing to meet it. It can be flipped through with as much attention as scrolling through an instagram feed, to which it will give confused and disjointed impressions which buzz above the cerebral cortex. Or it can be studied and meditated on, to which it will still give confused and disjointed impressions, but along with that, some contemporarily eternal thoughts on simulacra ... Schuhl’s approach is a kind of laissez-faire parenting, to let it happen, and consider the consequences from afar ... Though it is, to me, such a clumsy, careless thing to be undone by the doing. If simplicity is elegance, I concede--how simple and inevitable for us to have ended up here!
Read Full Review >>
See All Reviews >>
What did you think of Dusty Pink?
© LitHub | Privacy