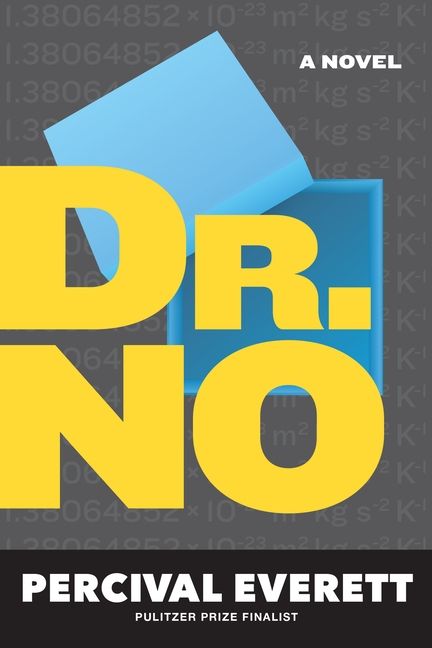 The protagonist of Percival Everett's puckish new novel is a brilliant professor of mathematics who goes by Wala Kitu. He is an expert on nothing. That is to say, he is an expert, and his area of study is nothing, and he does nothing about it. This makes him the perfect partner for the aspiring villain John Sill, who wants to break into Fort Knox to steal, well, not gold bars but a shoebox containing nothing. Once he controls nothing he'll proceed with a dastardly plan to turn a Massachusetts town into nothing. Or so he thinks.

What The Reviewers Say
Rave Molly Young,
The New York Times
Everett returns to certain themes: academia, language games, boxes containing secrets, Blackness and nonsense. Dr. No hits all of them ... One way to evaluate an artist is to observe the quantity and quality of misinterpretation his work begets. By this measure Everett ranks very highly. 'Damn it, I don’t understand it, but I love it,' mutters one of the characters, regarding Sill’s weapon of nothingness. Same.
Read Full Review >>
Rave Jennifer Wilson,
The Atlantic
... the latest zany masterpiece from the novelist Percival Everett ... our revenge seeker would seem to be both misguided and insincere. Over time, he degrades his sympathetic origin story by treating it as little more than plot filler, trauma that needs to be there to set up the kinds of melodramatic one-liners that we expect from our movie villains ... Over time, his motivations come to seem as hollow and empty as his weapon of choice ... No one understands the slippery nature of identity like a spy, and Everett relishes the devices of the spy thriller, wielding Bond tropes as if they were flame-throwing bagpipes or cigarettes laced with cyanide ... This is the fantasy of Black capitalism, and in Dr. No, Everett has given us an antagonist up to the task of representing its delusions—a villain who thinks he is a hero, a savior who shows up empty-handed.
Read Full Review >>
Rave Patrick Condon,
The Star Tribune
... what about supervillains? Maybe it's something about this uncertain era, populated by peculiar billionaires obsessed with outer space, irresponsible demagogues with cultlike followings, and yacht-bound oligarchs that make a character like Lex Luthor feel more realistic than a character like Superman ... A prolific novelist and finalist for both the Pulitzer Prize and the Booker Prize, Percival Everett plays with that possibility to dizzyingly good effect ... In the villainous character of John Milton Bradley Sill, Everett gives us a charmingly witty, possibly insane billionaire with a decades-long grudge to bear against the United States and an elaborate plan for revenge that hinges on the application of a deeply esoteric field of mathematics ... a breezy, strange, frequently hilarious, action-adventure story that's rife with Everett's talent for deadpan dialogue and vivid scene-setting, but just as equally given to brainy tangents and wordy digressions on dense mathematical concepts ... It's also another thoughtful entry in Everett's career-long literary exploration of America's troubled racial legacy. But he keeps the mood light by mimicking the silliest conventions of spy movies, with a story that shifts between exotic locales and luxury compounds, and a large cast of characters chasing around in planes, a submarine and a yacht, heavily armed jeeps and sports cars. Kitu makes for a delightfully eccentric protagonist, a maladjusted math whiz with a one-legged dog, Trigo, who talks to him in dreams ... might be a little too odd, a bit too brainy and inclined to philosophic-mathematic ruminations to significantly build on any new fans Everett gained with his last few, lauded novels. Still, fans of last year's The Trees will see parallels — the earlier book a detective thriller with suggestions of the supernatural, Dr. No a spy caper that shades into science fiction, both propelled by reckonings over racial injustice ... What marks Everett as a singular talent is the way he elevates such serious concerns inside a stylishly executed, frequently hilarious pair of genre thrillers. By the end of Dr. No, even as the self-negating logic of Everett's plot about nothing builds to an inevitably surreal conclusion, a more pertinent question than what's happening (or not happening) on the page might be, what are the actual chances that an unhinged billionaire with limitless resources and a righteous sense of grievance could bring widespread harm upon society? Probably not nothing.
Read Full Review >>
See All Reviews >>
SIMILAR BOOKS
Coming Soon

Victory City
Salman Rushdie
Rave
What did you think of Dr. No?
© LitHub | Privacy