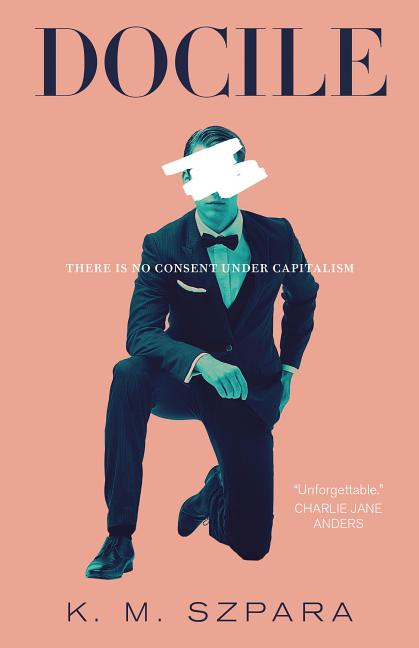 Elisha Wilder’s family has been ruined by debt, handed down to them from previous generations. His mother never recovered from the Dociline she took during her term as a Docile, so when Elisha decides to try and erase the family’s debt himself, he swears he will never take the drug that took his mother from him. Too bad his contract has been purchased by Alexander Bishop III, whose ultra-rich family is the brains (and money) behind Dociline and the entire Office of Debt Resolution.

What The Reviewers Say
Positive Kristi Chadwick,
Library Journal
Explicit sex, mental and physical dominance, and control are strong beats within a story of two young men discovering the truth about their own lives and those of others around them ... This powerful debut is filled with achingly tender and brutally raw prose. Szpara strikes out at capitalism as well as the pharmaceutical trade and its effects, while dancing on the emotional knife’s edge between love and obedience.
Read Full Review >>
Mixed Liz Bourke,
Tor.com
Szpara really doesn’t delve too deeply into the absolute horror-show of possi­bilities opened up by 'perfectly compliant slaves who don’t remember what happens to them,' given the American history of slavery and the nation’s history with supporting workers’ rights, it feels a bit like flinching ... In many ways, this is a compelling exploration of coercion, affection, complicity, and the nature of consent. Szpara is a persuasive writer, and his choice to alternate chapters between Elisha’s first-person narrative and Alex’s point of view—also told in the first person—is one that propels the reader into sympathy with both of these characters ... The only problem: I don’t like it. Narratives that involve behavior modification to the point of utter dependence—learned helplessness—are deeply disturbing to me. That, combined with the sexualization of the master-servant relationship, turns this into a novel containing multiple sexual acts where one party has either extremely limited or no real capacity for meaningful consent. Elisha is raped, multiple times, and his rapes are physically pleasurable for him and graphically described. It feels pornographic, and not in a good way ... I’m not entirely sure he succeeds, but like it or loathe it, there’s no denying that Docile is trying to ask interesting questions about capitalism and consent.
Read Full Review >>
Mixed Maya Gittelman,
Bookreporter
Every reader will have a different take, and I know many who love this book unequivocally. But my discomfort is twofold, beginning with the dual points of view ... I will never be comfortable being asked to sympathize with a man who not only is himself a slave owner, torturer and rapist, but who owns the company that enables it and actively perpetuates that system ... There’s nothing titillating about rape culture and assault. The tagline states, 'There is no consent under capitalism,' and that’s certainly emphasized, but the dynamic is so inextricably imbalanced, and the sex scenes are explicitly rape. Literary relationships certainly do not need to be healthy, and I love complex queer narratives, but it feels incongruent to ask the reader to reckon with the degree of sexual, emotional and physical violence and blatant lack of agency, and still be open to the idea of romance. Docile doesn’t inherently romanticize an abusive relationship, but it asks you to root for one ... Szpara’s writing is unflinching, effective and compelling, and serves to explore the beats of the power dynamic at play. I just don’t know if it’s worth further traumatizing queer readers and survivors for the sake of this point ... My other concern is that this is a book about slavery in America that never reckons with race ... fails to reckon with the racist realities at the core of its premise and this nation ... unquestionably sharp in many ways, and I love the queer, dystopian critique of toxic power dynamics on both systemic and intimate levels. Many readers find the book cathartic, and that isn’t something that I can police. But I personally walked away uncomfortable at the graphic abuse, the abusive relationship portrayed as romantic, and the lack of racial consciousness within a slave narrative.
Read Full Review >>
See All Reviews >>
SIMILAR BOOKS
Fiction

The Women Could Fly
Megan Giddings
Rave
What did you think of Docile?
© LitHub | Privacy