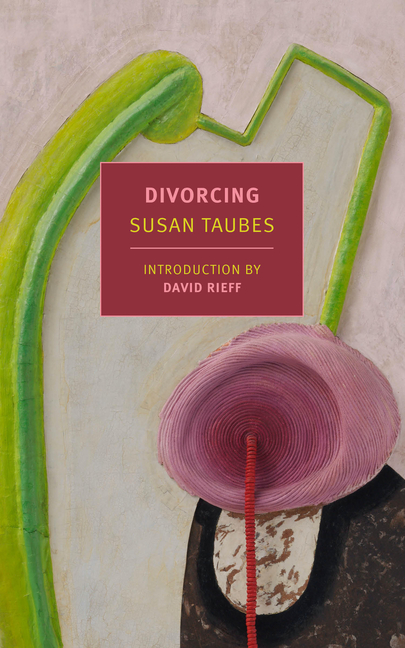 Dream and reality overlap in Divorcing, a book in which divorce is not just a question of a broken marriage but names a rift that runs right through the inner and outer worlds of Sophie Blind, its desperate protagonist. Can the rift be mended?

What The Reviewers Say
Rave Leslie Jamison,
The New York Review of Books
Divorcing is a strangely provocative and unsettling work of art—a quilt of memories, dreams, arguments, trysts, snippets of motherhood, and dark fantasies, including an autopsy, a funeral, and a trial. The novel moves across national borders—her working title was To America and Back in a Coffin—and zigzags constantly between gruesome daydreams and mundane daily life. The thresholds that obsess it most are death and divorce, the latter as a kind of death-in-life. Both dangle the prospect of simultaneous anguish and liberation; both illuminate Sophie’s desire for self-possession ... thrilling economy. Taubes whittles the expansive terrain of the marriage plot into a single paragraph ... These pages are full of affairs that veer between unsentimental detachment and impulsive romance, refusing to resolve into any consistent emotional register ... By dramatizing the messy intersections between Sophie’s life as a mother and her life as a lover, Divorcing collapses the madonna–whore dichotomy ... Part of the novel’s brilliance is its refusal to remain trapped in the tonal claustrophobia of either anguish or optimism ... tacking back and forth in time allows Taubes to dramatize, in a nuanced rather than reductive way, the connection between Sophie’s relationship with her husband and her relationship with her father ... It certainly carries the bloody residue of pain and the imminent arrival of death. But the novel isn’t just bleeding. It’s crafted. It shapes pain into something intricate and searching.
Read Full Review >>
Positive Jess Bergman,
Jewish Currents
Divorcing is an elliptical experiment; its autobiographical aspects reveal themselves only by degrees ... A disorienting, imagistic recollection of various rooms gives way to Sophie’s matter-of-fact description of her own decapitation-by-automobile on Paris’s Avenue George V. This graphic accident would be more jarring had the novel not immediately primed our skepticism ... Divorcing’s structural slipperiness earns Taubes comparisons to Renata Adler and Elizabeth Hardwick in the novel’s new publicity copy, but the book’s closest analogue might be the Austrian writer Ingeborg Bachmann’s 1971 novel Malina, another nightmare-haunted portrait of a woman unmoored ... If Jacob occasionally made a fool of Taubes in life, she had her revenge in fiction. Divorcing is unsparing in its emphasis on Ezra’s scorekeeping, his potbelly, his intellectual fraudulence ... Ultimately, Divorcing is a compendium of severance: not just a wife from her husband, but a family from their homeland, and a people from their God ... Beneath the surface, the calamity of the Holocaust runs through this fragmented novel like shrapnel ... In one of many linkages of the personal and world-historical, Divorcing also provides a more pedestrian image of disintegration in the form of objects that Sophie and Ezra have misplaced over the course of their peripatetic marriage ... Consider the novel’s final scene: Sophie wakes from a dream of an imagined journey to embark on an actual one. Or does she? It’s difficult to tell. But Sophie isn’t bothered by the ambiguity of her circumstances ... That the simplicity of this conclusion eluded Taubes outside fiction is a tragedy. But she made a life’s work from its absence.
Read Full Review >>
Rave Scott Cheshire,
The Washington Post
... I have rarely read a novel as death-haunted as this one. This is the story of a failing marriage, yes, but also the account of a cracking consciousness, both in the sense of its literary liveliness and the sense of a mind becoming unmoored and increasingly consumed by suicidal ideation ... Indeed, Divorcing courts death. Which is not to say literary necro-leaning is its only aspect. Nor is it dour. Divorcing is often very funny, always alive, bursting with ideas, full of formal vitality and change ... this feels like a book both stuffed with fiction and nonfiction, memory and play ... Taubes has a fierce imagination and perspective ... One can’t help but read Taubes’s creation in Blind as a self-referential act, what some might call auto-fiction, but this is more exciting and tangled than that usually promises. Taubes took her own life just a few weeks after the book was published, unfortunately. “Divorcing” serves as a singular epitaph, a once missing, now welcome, brilliant work of late modernism.
Read Full Review >>
See All Reviews >>
SIMILAR BOOKS
Fiction

This Other Eden
Paul Harding
Rave
What did you think of Divorcing?
© LitHub | Privacy