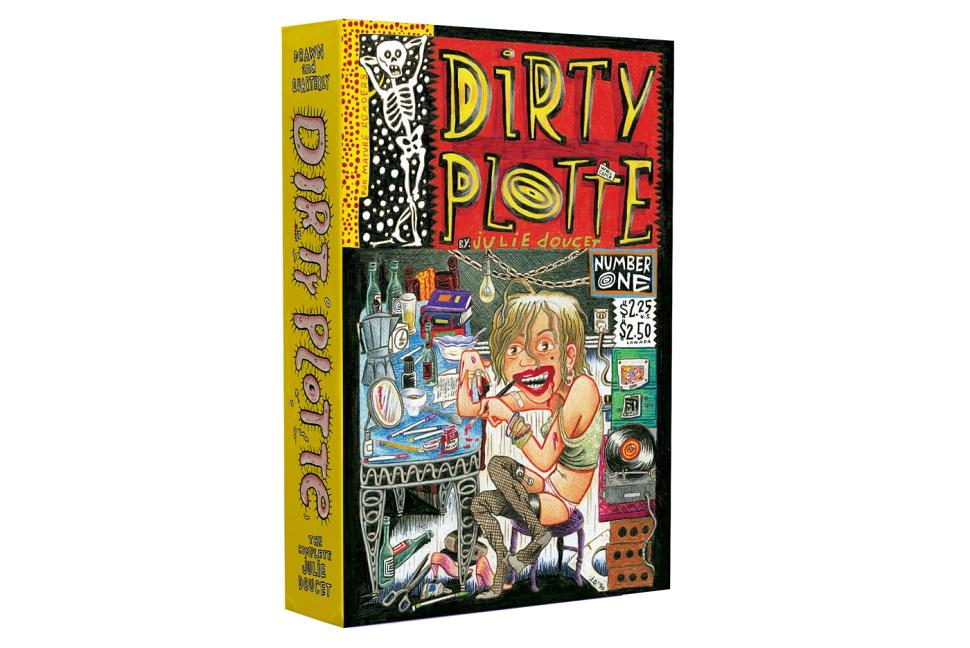 The feminist 1990s comic series Dirty Plotte is collected here along with Doucet's other works from that period, including My New York Diary, rarer previously unpublished material, and essays about her comics legacy and influence.

What The Reviewers Say
Rave Hillary Chute,
The New York Times Book Review
Dirty Plotte...a gorgeously designed box set offering two hardcover volumes collecting Doucet’s entire comics oeuvre, arrives at an opportune moment. It’s a lavish history lesson for those who might take today’s outpouring of feminist comics for granted, returning readers to the skimpier landscape of the 1990s, when Doucet’s work, in both concept and style, broke new ground. Its aesthetic echoes forebears like Lynda Barry and Aline Kominsky-Crumb, yet its execution and vision are different. (Doucet’s dense panels, full of precise, stylized shading and characterized by heavy black-and-white contrast, swarm with details; they appear as the comics equivalent of a deep focus shot, the film technique used by Orson Welles and others in which the foreground, middle-ground and background are all in focus. In Doucet’s comics, a coffee cup has personality; the objects in a room seem to dance.) And while most of the material dates from 20 to 30 years ago—Doucet abandoned comics in 2000—the wonderment and rage at virulently gendered behavior feels fresh, and relevant for this moment. The physicality of Doucet’s work is still shocking ... It’s a darkly funny, jolting vaudeville.
Read Full Review >>
Rave Nicole Rudick,
The New York Review of Books
Louche, mordant, funny, and surreal, Dirty Plotte comprises a mix of short and long comics—wordless and with dialogue, narrative and plotless, autobiographical and fictional (and everything between)—in which there are no rules. Nor are any subjects off-limits ... these comics are as pertinent and captivating today as when they first made their way into the culture ... Doucet’s parodic depictions of intense violence are still unsettling; her elastic treatment of sex and gender is still daring; and her open-ended treatment of female identity is still vital ... if the environment of Dirty Plotte is acutely Doucet’s own—relying primarily on dreams, fantasies, and imagined scenarios starring a version of herself—it is also freewheeling enough that readers, particularly women, can recognize something of themselves in it ... in calling out her fantasies and fears with words and pictures on the page, Doucet uses transgression to carve out a space of power and freedom. She revels in the joy of unfettered exploration, and her enthusiasm buoys otherwise dark subject matter ... Doucet’s distinctiveness is equally due to her highly graphic drawing style: packed, rambunctious black-and-white panels depicting cramped interiors swarming with bric-a-brac and busy street scenes alive with eccentric humanity.
Read Full Review >>
Rave Frederik Byrn Kohlert,
Los Angeles Review of Books
With a visual style and an approach to storytelling that are both anchored in the grotesque, Doucet’s comics serve as a direct kick in the groin to dominant notions of feminine propriety and good taste in general ... Doucet’s short comics mix the wildly imaginative with the intensely personal. Common to especially the early stories is an uncompromising sense of anything-goes dream logic; and although her comics consistently challenge masculine perspectives by depicting female unruliness and bodily messiness, the joyously freewheeling and often curiously innocent nature of her work means that it is never in danger of succumbing to a dull and programmatic version of feminism. Instead, Doucet’s emphasis on untraditional, in-your-face expressions of femininity means that her comics are closer in spirit to the riot grrrl–inflected feminism of the grunge era ... Dirty Plotte brings to light the sheer volume and consistency of vision in Doucet’s comics work, all of which was produced in little more than a decade ... It affirms Doucet’s status as a groundbreaking and taboo-demolishing antecedent to today’s women cartoonists, many of whom approach comics making with a similar lack of self-consciousness about the form’s ability to depict the realities of lived female experience.
Read Full Review >>
See All Reviews >>
What did you think of Dirty Plotte: The Complete Julie Doucet?
© LitHub | Privacy