Didn't We Almost Have It All: In Defense of Whitney Houston 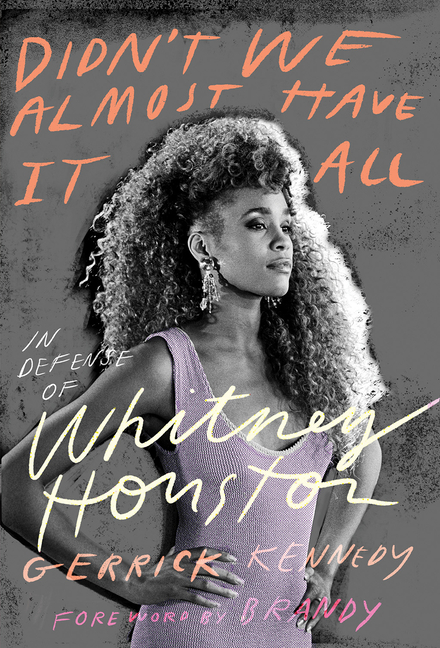 A music journalist peels back the layers of Whitney Houston's complex story to get to the truth at the core of what drove her, what inspired her and what haunted her while examining the complicated cultural legacy of her life and work.

What The Reviewers Say
Positive Allison Stewart,
The Washington Post
... a collection of unsparing, deeply personal essays on the singer’s life and career ... Kennedy’s book, unlike so many before it, is not a gossipy biography but a collection of often powerful meditations on Whitney’s life and the culture that failed her ... it also features a foreword by singer-songwriter Brandy ('Whitney made me feel like anything was possible, even though everything she was doing had been so impossible for Black girls to achieve.')
Read Full Review >>
Positive Terri Schlichenmeyer,
Indianapolis Recorder
In his introduction, author Gerrick Kennedy indicates that he wanted his book about Houston to be different from all the others, more meaning, less trouble. He succeeded. To a point. It’s difficult to extricate Houston the icon from Houston the megastar—they are mostly one in the same—and stepping back two generations or profiling other singers and music executives doesn’t help as much as Kennedy asserts. That stuff is all fluff; interesting but covered elsewhere. The best part of Didn’t We Almost Have It All? comes in the latter third of the book. It’s there that Kennedy examines the depth of Houston’s contributions and the 'meaning' of her decline and death to the Black community. There’s a lot of introspection in it, as well as a shift in how we think about our celebrities. Tackle Didn’t We Almost Have It All? therefore, and you can expect to see things you already know, but you can also expect to be delighted. It’s a fan’s book, for sure, and reading it might be the greatest love of all.
Read Full Review >>
Positive Emily Dziuban,
Booklist
The thematic rather than chronological structure of the chapters results in some repetition. Even so, Kennedy’s winning argument invites readers to focus on Houston’s triumphs: the ceilings she broke and the pathways she paved. Particularly impactful is Kennedy’s work to locate Houston’s legacy in a historical-cultural context, retrieving, for example, the no-longer-sung, racist third verse of 'The Star-Spangled Banner'—which she breathtakingly performed in 1991—and contemplating the meaning of a Black woman performing the national anthem at such a profound level.
Read Full Review >>
See All Reviews >>
What did you think of Didn't We Almost Have It All: In Defense of Whitney Houston?
© LitHub | Privacy