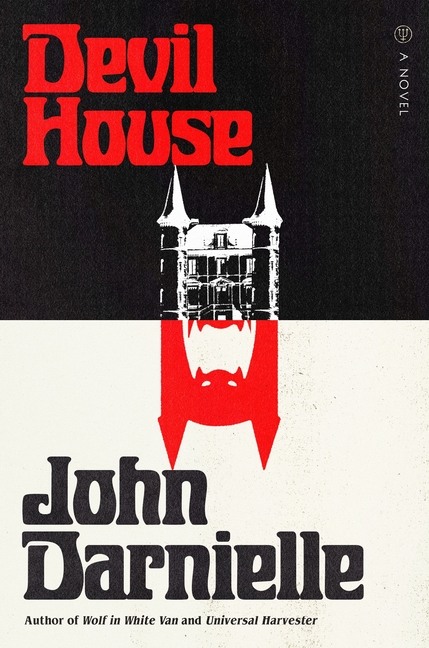 Mountain Goats' singer-songwriter Darnielle offers a metafictional tale about a true-crime writer named Gage Chandler, who is descended from kings. After Chandler moves into the house where a pair of notorious murders occurred in the 1980s, his research leads him into a puzzle he never expected—one that gets at the very core of what he does and who he is.

What The Reviewers Say
Rave Dwight Garner,
The New York Times
... terrific: confident, creepy, a powerful and soulful page-turner. I had no idea where it was going, in the best possible sense ... The thing about Darnielle’s writing, in all its forms, is this: If you’re that dorky outcast kid drawing a pentagram on the back page of your three-ring binder in algebra class, not because you want to drink anyone’s blood but because you think it’s cool, he sees you. His novels are in close contact with the alternative cultural universes of fantasy and the occult and science fiction, yet they don’t resemble genre fiction. They’re earthy and fly low to the ground. They are plain-spoken and in no hurry ... Devil House...[is]never quite the book you think it is. It’s better.
Read Full Review >>
Rave Zack Ruskin,
San Francisco Chronicle
John Darnielle’s latest novel, set in Milpitas, delivers as a riveting reflection on the nature of true crime and storytelling. What matters more in the genre of true crime: the crime or the truth? Such is the question at the heart of Devil House, the masterful third novel from Mountain Goats singer-songwriter John Darnielle. Simultaneously functioning as a gripping murder mystery, a meditation on place and a metafictional dissection of the true-crime genre, Darnielle’s latest proves rather decisively that his immense talents as a musician extend to the written word as well ... Suspenseful, brilliant and chaotically addicting, Devil House triumphs as a page-turning metafictional treatise on the power of narratives cloaked in the trappings of a certifiable true crime classic.
Read Full Review >>
Rave Bradley Babendir,
The A.V. Club
[A] brilliant novel ... After the first section, detailing Chandler’s project, come alternating sections about the Devil House murders and one of Chandler’s previous books about another case, The White Witch murders ... Ingrained in each part is a question about the nature of true crime and whether it’s possible to write it ethically and with real compassion for the victims ... Darnielle skillfully navigates the difficult point of view, pulling the reader ever tighter into the narrative. He sprinkles the first-person throughout as a reminder that it’s Chandler who’s telling the story, and each hits like an unexpected creak, as if I’d been caught watching something I shouldn’t have been ... The sections set in the Devil House are comparatively conventional, but no less gripping ... Unfortunately, the novel’s interlude nearly derails the book. The telling of a Welsh legend about King Gorbonianus, it’s written in a dreadful mock medieval syntax ... Its connection to the narrative is tenuous, it illuminates very little, and perhaps the best evidence that the rest of Devil House is spectacular is that even this section can’t ruin it ... Darnielle impressively dramatizes the writing of a true crime book and the massively deleterious effect the process has on a person genuinely concerned with the ethics of what they’re doing ... Darnielle renders this dilemma—and the bad-taste curiosity that compels people to read and write true crime despite reservations—with such depth and clarity that it feels like he’s somehow culpable too. That’s good fiction writing.
Read Full Review >>
See All Reviews >>
SIMILAR BOOKS
Fiction

The Committed
Viet Thanh Nguyen
Positive
What did you think of Devil House?
© LitHub | Privacy