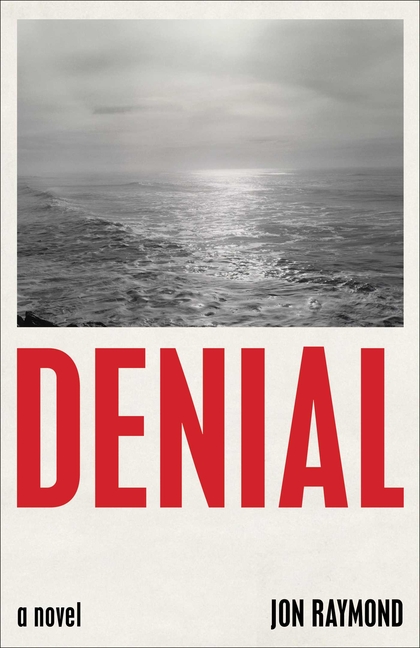 The year is 2052. Global warming has had a predictably devastating effect: Venice submerged, cyclones in Oklahoma, megafires in South America. Yet it could be much worse. Two decades earlier, the global protest movement known as the Upheavals helped break the planet's fossil fuel dependency, and the subsequent Nuremberg-like Toronto Trials convicted the most powerful oil executives and lobbyists for crimes against the environment. Not all of them.

What The Reviewers Say
Rave EMMA MAYER,
Newsweek
... enthralling ... questions the state of the world as well as the nature of man. How does one balance justice with the natural state of this new and unforgiving world? How does one need to live, act and treat one's fellow man, especially if they were raised to believe that that man is the enemy? And how does one cope with a death sentence of one's own when the planet is burning? ... The not-so-distant future of Denial's questions much of we think we know about life and death and the consequences of our decisions. While Denial discusses climate change, that conversation is pleasantly understated as it is seamless woven into in the talk of the characters' priorities that result from the moral dilemmas of their action ... This subtle and morally engaging novel is a simple yet thought-provoking read. Raymond's chaste yet exquisitely descriptive language paints the world for what it is—in all of its beauty and destruction—and his well-constructed plot turns the thrill of the chase on its head.
Read Full Review >>
Positive David Pitt,
Booklist
The carefully sculpted prose has an addictive quality: the startling first sentence compels us read the second sentence, and before we know it, we’re almost at the end. With its fully realized depiction of a world recovering from cataclysmic events that happened only a couple of decades earlier, this is a natural fit for fans of near-future thrillers and for followers of Jeff VanderMeer’s environmentally themed fiction.
Read Full Review >>
Positive Kirkus
Not all of the pieces of this existential puzzle, including Sobie, fit together. You may wonder why, assorted climatic catastrophes aside, 2052 doesn't seem much different from 2022. But Raymond’s style is so smooth and agreeably understated, and yet so tension-packed, that it’s easy to overlook any imperfections. A screenwriter as well as a novelist, he is less interested in doomsday and justice themes than in the complicated ways big moral causes play out. As calmly as the novel builds to its rapt conclusion, it’s a page-turner ... A cool, compelling take on an incendiary topic.
Read Full Review >>
See All Reviews >>
SIMILAR BOOKS
Fiction

The Women Could Fly
Megan Giddings
Rave
What did you think of Denial?
© LitHub | Privacy