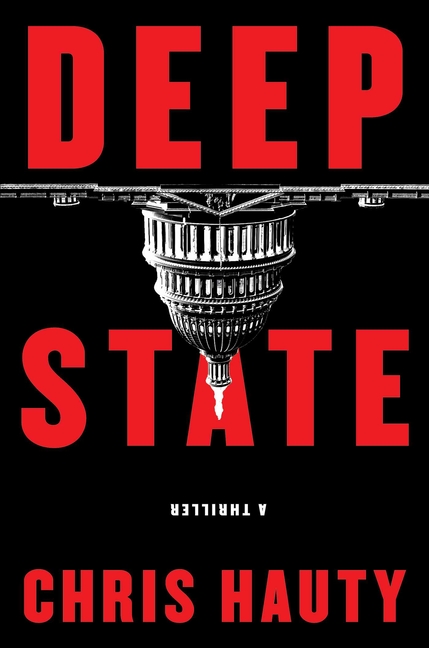 When the White House chief of staff is found dead in his house, a tenacious intern discovers a single clue that suggests he died from something other than natural causes. There may be wide-ranging conspiracy running beneath the surface of everyday politics—The Deep State is real. Who will die to keep its secrets? Who will kill to uncover the truth?

What The Reviewers Say
Rave Joe Hartlaub,
Bookreporter
Deep State is terrific. It is immediately engrossing, features a strong and endearing protagonist, and coasts along so smoothly and quickly that one never misses the fact that there is no good place to stop reading, if only temporarily. It is everything that a classic thriller, particularly a political thriller, should be ... It is full of twists and turns, including a big one at the conclusion ... if you were in front of me, I would forcefully place Deep State into your hands and guarantee you will enjoy every page of it, as much for Hayley as for the plot, the writing, and...well, everything.
Read Full Review >>
Rave Ryan Steck,
The Real Book Spy
... a white-knuckle reading experience that almost hits a little too close to home for comfort. The plot, more timely than most Americans will care to admit, moves at the speed of a runaway freight train, and Hauty’s hero, Hayley Chill, displays the kind presence that’s rarely seen in a debut novel. Perhaps most impressively, though, is the author’s uncanny ability to tell his story from both sides of the aisle without ever offering his own political commentary, making Deep State an enjoyable read for both conservatives and liberals—an increasingly rare feat in today’s world. With his super-charged plot and a perfectly-timed, mind-bending twist, Chris Hauty becomes the latest writer to take the thriller world by storm . . . Deep State will compete for best debut novel of 2020 and have readers dying for the anticipated follow-up.
Read Full Review >>
Mixed Jeff Ayers,
Booklist
... it reads like a screenplay ... The contentious political landscape plays out to realistic effect, but some jarring point-of-view shifts in the narrative take the reader out of the story temporarily. The ending seems pulled directly from a movie, which will remain nameless to avoid a massive spoiler. Hayley remains an intriguing character, however, making the novel still worth reading, even with its flaws.
Read Full Review >>
See All Reviews >>
SIMILAR BOOKS
Coming Soon

On Java Road
Lawrence Osborne
Rave
What did you think of Deep State: A Thriller?
© LitHub | Privacy