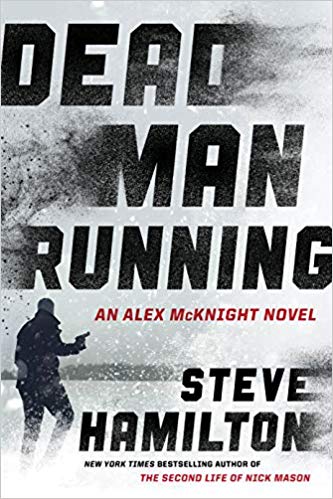 On the Mediterranean Sea, a vacationer logs on to the security-camera feed from his home in Scottsdale, Arizona. Something about his living room seems not quite right--the room is bright, when he's certain he'd left the curtains closed. Rewinding through the feed, he sees an intruder. When he shifts to the bedroom camera, he sees the dead body.

What The Reviewers Say
Rave Joe Hartlaub,
Book Reporter
McKnight, an ex-cop and occasional private detective living in Michigan’s Upper Peninsula region, tends to stick somewhat close to home as a general rule. Dead Man Running takes him out of his comfort zone, and then some. A couple from Scottsdale, Arizona, is on a cruise when the husband, monitoring their wireless security online, witnesses a shocking tableau. It consists of a stranger walking through their home and a dead woman in their bed. Law enforcement is immediately notified, a trap is set, and the stranger --- the killer --- is captured ... Dead Man Running is the real deal. Hamilton did his geographical homework while preparing to take McKnight to unexpected places, and it shows ... You won’t want to miss Dead Man Running, and you won’t want to put it down once you start reading it.
Read Full Review >>
Rave Christine Tran,
Booklist Online
In the eleventh Alex McKnight thriller, the Detroit ex-cop’s past continues to follow him to remote Paradise, Michigan, this time confronting him with a mysterious connection to a serial killer prowling the Southwest. Abruptly picked up by the FBI, Alex is hustled to the Phoenix interrogation of Martin Livermore, who is accused of murdering six women and abducting a seventh. Livermore refuses to speak to the FBI until Alex arrives, but Alex is certain that he’s never met him or his victims ... Hamilton’s long-awaited reboot of the McKnight series is a streamlined, gut-wrenching thriller driven by Alex’s desperation to end Livermore’s killing spree and reconcile past mistakes
Read Full Review >>
Rave The Real Book Spy
While on a cruise on the Mediterranean Sea, Frank Thompson takes a moment away from sunbathing on the deck with his wife to check his security camera at home. At first, the video feed coming through seems normal, until a man suddenly appears in his home. Switching cameras to follow the intruder around, Frank sits six thousand miles and eight time zones away while a stranger walks through his Scottsdale, Arizona home, making his way into the Thompsons’ master bedroom. What he saw next was truly horrifying ... Full of twists and turns, Hamilton’s latest McKnight novel is raw, dark, and absolutely relentless. . . Dead Man Running proves that Steve Hamilton is one of the best crime writers on the planet, and his latest showing will leave readers begging for more.
Read Full Review >>
See All Reviews >>
SIMILAR BOOKS
Coming Soon

Picnic in the Ruins
Todd Robert Petersen
Rave
What did you think of Dead Man Running?
© LitHub | Privacy