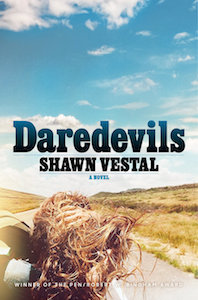 A novel set in Arizona in the mid 1970s about Loretta, a teenager married off as a 'sister wife,' who makes a break for freedom.

What The Reviewers Say
Positive Ryan McIlvain,
Los Angeles Review of Books
A little hard to believe, sometimes, that Vestal is a writer just out of the gate, but mostly it’s just exciting to watch such a talent unspool itself...Perhaps my favorite moments in Daredevils are the ones that manage to hang briefly free of the plot’s gravity, that carve a new character facet or a new moment in time out of language.
Read Full Review >>
Rave Liesl Schillinger,
The Barnes & Noble Review
[Vestal's] evocation of Loretta’s mind-set shows astonishing perception. Other writers, even female writers, often exaggerate the sensuality of young girls, overplaying their naiveté and sentimentality and diminishing their agency. Vestal understands that a girl like Loretta can be innocent and shrewd at the same time; that her desire and self-control are mutable and can be directed by her, depending on circumstance. He captures Loretta’s protean quality so well that it may disconcert some readers who are not used to seeing the young female psyche so unhypocritically laid bare...In Daredevils, Vestal sends his characters soaring across the gulf that separates the identity that confines them and the identity they would choose, letting them land roughly but firmly on the other side, broken but free.
Read Full Review >>
Mixed Jon Michaud,
The Washington Post
Vestal, who won the 2014 PEN/Robert W. Bingham Prize for a collection of stories called Godforsaken Idaho, is a fine stylist. There’s not a clunky sentence in this book. His portrait of Mormon family life is commendable for its aversion to easy sensationalism or satire. But despite all these virtues, I came away from Daredevils wanting something more ambitious. A hint of what might have been is available in a pair of chapters in which a minor character recalls a federal raid on her fundamentalist Mormon community in the 1950s.
Read Full Review >>
See All Reviews >>
SIMILAR BOOKS
Fiction

Each of Us Killers
Jenny Bhatt
Rave
What did you think of Daredevils?
© LitHub | Privacy