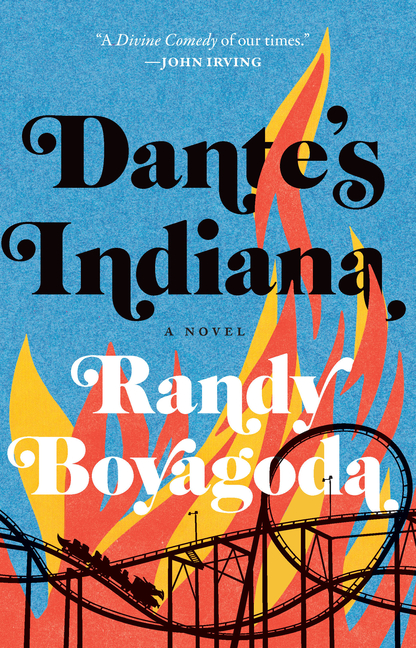 Middle-aged, married, but living on his own, Prin has lost his way. Desperate for money and purpose, he moves to small-town Indiana to work for an evangelical millionaire who's building a theme park inspired by Dante's Inferno. He quickly becomes involved in the difficult lives of his co-workers and in the wider struggles of their opioid-ravaged community while trying to reconcile with his distant wife and distant God. Both projects spin out of control, and when a Black teenager is killed, creationists, politicians and protesters alike descend. In the midst of this American chaos, Prin risks everything to help the lost and angry souls around him while searching for his own way home.

What The Reviewers Say
Positive Sam Sacks,
The Wall Street Journal
Prin first appeared in Mr. Boyagoda’s 2018 novel Original Prin, and while Dante’s Indiana can be read on its own, newcomers to the series may have a tough time getting up to speed on this character’s unlikely history (he survived a terrorist bombing in the first book) and the reasons for his estrangement from his wife, Molly, with whom he has four daughters. When the novel gains momentum, however, it mixes the outrageous social satire of George Saunders or Salman Rushdie with Prin’s more solemn and inward religious searching. The unique result juxtaposes the ridiculous and the sublime—fitting as both an homage to Dante and a portrayal of America.
Read Full Review >>
Positive Alex Good,
The Toronto Star (CAN)
[B]oyagoda isn’t interested in writing a modern version of the Comedy, on the order of what James Joyce did with Homer in Ulysses. He’s telling a story of redemption, but not following any formal model laid down by Dante, or even alluding to the Comedy much beyond a few obvious winks. Still, given the precedent being invoked it’s clear Boyagoda set himself a challenge, and it’s one that he’s up to.
Read Full Review >>
Positive Kirkus
The novel's comedy can be overbroad or scattershot, but Boyagoda keeps things moving quickly and imaginatively. He skewers hosts of sinners along the way, but the wit has a winsome empathy behind it. A rollicking, inventive, mostly successful satire—with a vein of seriousness and sadness underneath.
Read Full Review >>
See All Reviews >>
SIMILAR BOOKS
Fantasy

Win Me Something
Kyle Lucia Wu
Rave
What did you think of Dante's Indiana?
© LitHub | Privacy