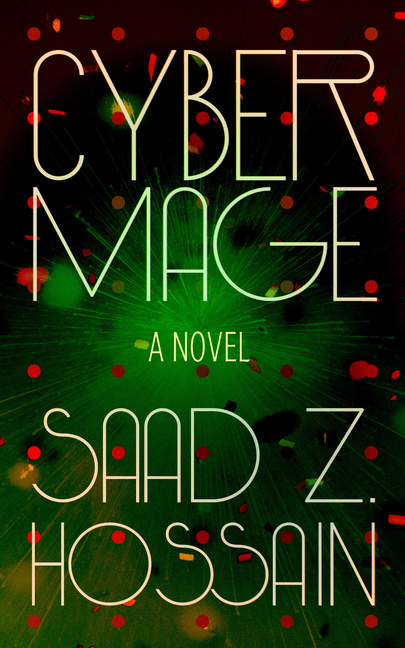 Saad Z. Hossain returns with a futuristic and ambitious novel in which humanity's only hope is a snarky teenage hacker who calls himself the Cyber Mage.

What The Reviewers Say
Rave T.G. Shenoy,
Locus
Cyber Mage sees the return of some familiar characters but in a wholly new setting and in a compelling post-climate change story replete with vivid characters and his by-now trademark mix of dark humour, social satire, breezy style, and galloping pace ... Hossain deftly weaves together multiple plot­lines—involving free-willed, intuitive-thinking AIs, djinns working code, shenanigans aboard the International Space Station (which was sold by NASA to Amazon, by the way), throneless kings, otherworldly intrigue, dragons, whisky-loving djinn, and a depressed cowardly airport—stitching them into a singularly fine fabric of a novel, with an action-packed climax worthy of a Hollywood summer blockbuster (and that’s a compliment!). Cyber Mage hits the sweet spot of being engaging and making you laugh and think in equal measure. If genre-bending novels are your cup of tea, then take a sip from this book. You will not stop till the cup is empty, leaving you wanting more.
Read Full Review >>
Positive Marlene Harris,
Library Journal
Hossain's novel can certainly be read as a cautionary tale about climate change, but the energy that powers this story will remind many readers of a twisted version of Ernest Cline's Ready Player One: society has descended into dystopia after ecological catastrophe; the protagonist's quest is driven by privilege and self-interest; and the virtual world runs on greed ... Highly recommended for readers of cli-fi and those looking for a story that explores the virtual world.
Read Full Review >>
Rave Publishers Weekly
... [a] giddy new novel, another inventive blend of mythology and cyberpunk gizmology ... Hossain puts a clever spin on both high fantasy and hard science tropes as ancient djinns wield futuristic technology to go head-to-head with humans empowered with their own technowizardry. Fans of both genres will find this an enjoyable romp.
Read Full Review >>
See All Reviews >>
What did you think of Cyber Mage?
© LitHub | Privacy