Cruising: An Intimate History of a Radical Pastime 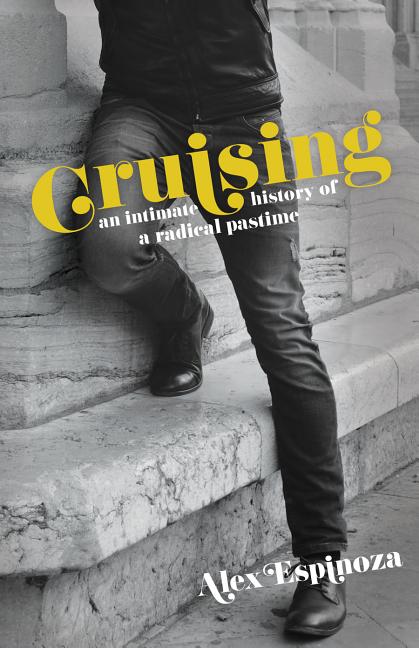 In this exploration of the ways men have sought men for fleeting sexual encounters, the author traces this subversive practice from Greek antiquity to the notorious Molly houses of 18th century England, from the raucous 1970s to the algorithms of Grindr, and from Oscar Wilde to George Michael.

What The Reviewers Say
Rave David Azzolina,
Library Journal
What makes this book so appealing is the way Espinoza combines his own experiences of cruising from adolescence to the present, and as a Chicano, with a cogent analysis of the role of cruising; an antihegemonic activity against a patriarchal system—and he writes beautifully ... Recommended for LGBT and contemporary culture collections.
Read Full Review >>
Positive Michael Nava,
Los Angeles Review of Books
One of the most interesting discussions in the book asks whether the contemporary hook-up culture promoted by apps like Grindr and Scruff is an extension of cruising or an entirely different practice ... there are many thorny questions raised by the culture of cruising that Cruising side-steps or simply does not ask. Cruising is a relatively brief book and clearly meant to be celebratory. As such, it is hardly the last word on the subject. If it was simply a memoir, based on Espinoza’s positive experience of cruising, it could be taken at face value. But cruising as the practice of men having sex in public spaces raises some tough questions and, because the book calls itself a history, however brief, a reader might legitimately ask why they were not addressed as part of that history ... As a memoir, Cruising is touching, resonant, and deeply felt. As a history of cruising it is, if not definitive, a provocative starting point. Whatever its omissions, Espinoza’s book invites us to think about the right to freedom of sexual expression and where it fits in within the larger aims of the LGBTQ community. That’s certainly a discussion worth having.
Read Full Review >>
Positive John Birdsall,
Los Angeles Times
Memoir is the powerful heart of Espinoza’s book, the places where he makes us feel the power of cruising as what he calls a 'cultural identifier' of gay experience, the act that marks us as constitutionally different from straight people. Other places in Cruising, Espinoza seems less engaged ... But when he takes us to the L.A. he knew, to the gayopolis of WeHo he experienced at 19, where bookstore owners thought nothing of displaying Inches magazine, Espinoza makes us feel the power of carving out queer spaces in the wider city. Espinoza also struggles with modern gay hookup apps (Grindr, Scruff, Growlr, BRO, Hornet, DaddyHunt) and how to place them in the history of cruising ... Cruising does better at capturing a moment fixed in analog time[.]
Read Full Review >>
See All Reviews >>
What did you think of Cruising: An Intimate History of a Radical Pastime?
© LitHub | Privacy