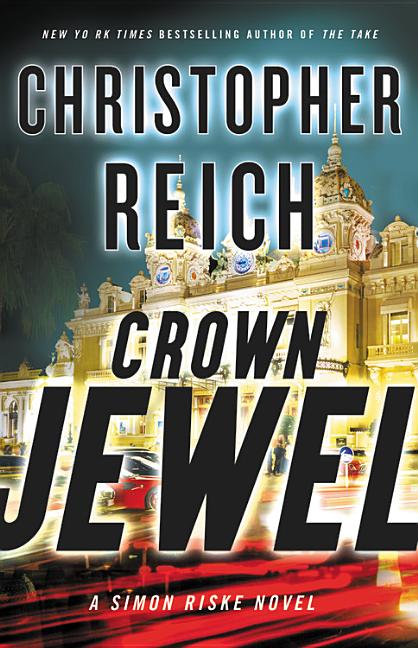 International spy Simon Riske connects a series of crimes in Monte Carlo's most lavish casinos to a brutal plot by an organization of criminal gamblers.

What The Reviewers Say
Rave Steve Donoghue,
Open Letters Review
At some point during the gestation of this Simon Riske series, Reich made the all-important decision to set the whole business in Cloud-Cuckoo Land rather than in the real world. This same decision has worked extremely well in the past for authors such as Ted Bell, Clive Cussler, and Jack Higgins, and it works extremely well here. The point in Crown Jewel isn’t the absurdity of the Duke of Suffolk asking an unqualified stranger to fly to Monaco (all expenses paid, of course) and stop a multimillion-dollar casino theft, no; the point is that the stranger is Simon Riske, hero extraordinaire ... akes its readers on many hairpin turn at breakneck speed, but in the end, things really are as simple as that. Readers of this kind of book expect nothing less, but the honest truth is that a great many of the current crop of such books don’t always manage to deliver even on their own very simplified terms. These first two Simon Riske novels deliver. Here’s to many more.
Read Full Review >>
Positive Michele Leber,
Booklist
Reich’s solid tradecraft and nonstop action are humanized by the hint of a relationship of the heart and by the presence of Vika’s 12-year-old son, who becomes a skilfully played pawn. A stylish international thriller.
Read Full Review >>
Positive Guy Bergstrom,
Criminal Element
There are expensive super-cars involved in deadly chases, wealthy villains with yachts and Swiss bank accounts, along with a series of beautiful women with whom Riske gets involved. This part of the story feels more like the old ‘60s and ‘70s Bond movies, with most of the female characters showing up only once, never to be seen again. The major exception to this is the female lead who does stick through to the end of the story ... While the heart of mysteries is more in the whydunit than the whodunit, thrillers are about betrayal—and there is a big, fine betrayal in the climax of
Read Full Review >>
See All Reviews >>
SIMILAR BOOKS
Fiction

The Devil Takes You Home
Gabino Iglesias
Positive
What did you think of Crown Jewel?
© LitHub | Privacy