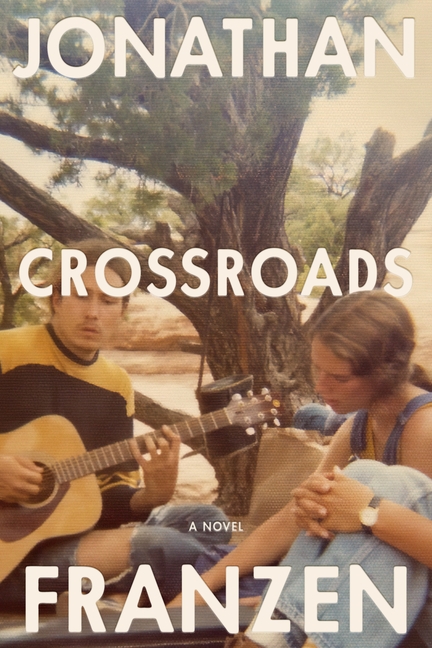 The first installment of a new trilogy from the National Book Award-winning author of The Corrections and Freedom. Crossroads is a family saga set in a Chicago suburb in the early 1970s, where each of the dysfunctional Hildebrandts (led by associate pastor/patriarch-in-turmoil, Russ) is experiencing a seismic identity crisis.

What is this?
Positive
Based on 52 reviews

What The Reviewers Say
Rave Frank Guan,
Bookforum
Giving up, for now, in Crossroads, on representing present youth, Franzen has doubled down on representing the white ones’ parents and grandparents as the impressionable, inquisitive, and dynamically flawed young men and women that they once had been. In dreams, as a once-famed tale from the Depression had it, begin responsibilities ... To set a novel half a century in the past, as he now does, is something like dealing oneself a full house. In playing to his strengths so inordinately he has unlocked a new, late style, distinct from the well-hewn blocks of prose poetry typical of his first three novels or the mashed-potatoes-and-gravy consistency of his last two. The Corrections was a masterpiece, but Crossroads is his finest novel yet. Unpolished and unsloppy, difficult to quote or fault, his free indirect style sticks to the contours of consciousness and attempts not one thing else. In a quiet and uncanny fashion it is entirely adequate: a prosaic causeway coursing through the swamp at night ... Though no serious fiction writer would impose their own belief upon their readers, what Crossroads does make clear is that Franzen, through his characters, has rendered it impossible for readers not to be engaged by the most momentous questions of faith ... His ambition in this novel is not only to mirror society, but to return the individual reader to themselves, to grind a lens in which the major questions structuring our single lives on Earth retain their focus and integrity. All of this sounds Dostoyevskian because (with the requisite adaptation for American environs) it is ... Crossroads is Franzen’s greatest and most perfect novel to date, but more importantly, it is his most promising: an inexhaustible resource for future novels, and not only his own. What impresses most is the sense that its successors, hopefully present soon, will all but certainly exceed it.
Read Full Review >>
Rave Dwight Garner,
The New York Times
... a mellow, marzipan-hued ’70s-era heartbreaker. Crossroads is warmer than anything he’s yet written, wider in its human sympathies, weightier of image and intellect. If I missed some of the acid of his earlier novels, well, this one has powerful compensations ... Franzen patiently clears space for the slow rise and fall of character, for the chiming of his themes and for a freight of events — a car wreck, rape, suicide attempts, adultery, drug deals, arson — that arrive only slowly, as if revealed in sunlight creeping steadily across a lawn ... Franzen threads these stories, and their tributaries, so adeptly and so calmly that at moments he can seem to be on high-altitude, nearly Updikean autopilot. The character who cracks this novel fully open — she’s one of the glorious characters in recent American fiction — is Marion, Russ’s wife ... The Franzen-shaped hole in our reading lives is like a bog that floods at roughly eight-year intervals. This time that bog is shot through with intimations of light ... Flannery O’Connor spoke of the 'moment of grace' that appears in many of her stories, 'a moment where it is offered, and usually rejected.' Franzen’s novel is flush with such moments. It’s about tests most of us fear we are not going to pass.
Read Full Review >>
Positive Rumaan Alam,
The Nation
It’s played straight, with nary a joke or postmodern gag in evidence. But that I read all 580 pages of it (too many; being presumed great means editors give you a wide berth) in three days is a testament to Franzen’s ability with the novel form. He’s a storyteller, a master at holding the reader’s attention, himself attentive to that reader’s pleasure. He’s surely among the great American novelists, but Crossroads also finds Franzen discharging his powers in a way that feels like a departure ... Nothing about the Hildebrandts’ middle-class, Midwestern anomie is new for a Franzen novel, even if it is well-done ... So much, maybe too much, of Crossroads is devoted to teenagers and their travails, but it is their parents’ stories, particularly Marion’s, that prove to be far more interesting. The complaint that Franzen is a throwback to the mid-century man of letters would be more credible were he not so adept at writing characters who happen to be women, and Marion is an example of the author at his most imaginative ... Franzen depicts Russ’s benighted and troubling view of the Navajo as an inscrutable other without reducing the Navajo themselves to such on the page ... I love books where language is the principal concern, narratives constructed from oblique fragments, and works of fiction that test the boundaries of how we define the novel. Crossroads is none of those things. Yet even readers like me cannot but succumb to the charms of plot and momentum, characters and conversation ... Knowing this is but the first installment in a larger work changed how I read it: The novel didn’t quite satisfy, but I never expected it to be more than a first course.
Read Full Review >>
See All Reviews >>
SIMILAR BOOKS
Fiction

Pure Colour
Sheila Heti
Positive
What did you think of Crossroads?
© LitHub | Privacy