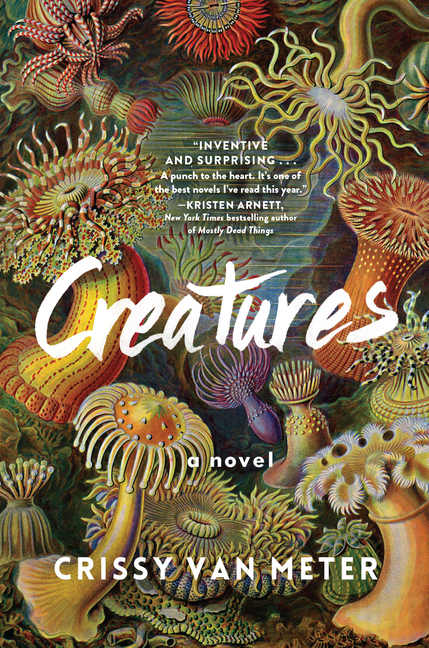 Set on a fictional island off the coast of Southern California, a woman on the eve of her wedding must reckon with her chaotic but also free-spirited upbringing, her dysfunctional parents, and her attempts to love unconditionally as an adult despite never having been taught how.

What The Reviewers Say
Rave Laura van den Berg,
The New York Times Book Review
Crissy Van Meter’s vivid and moving debut, is a novel powered by atmosphere ... The characters are as complex and explosive as the setting ... As Creatures unfolds, Van Meter subverts narrative expectations by making long and frequent digressions away from the compelling present, pre-wedding story line, to reveal either the past or future ... eventually this structure begins to sway under its own weight. The glimpses into the future beyond Evie’s wedding day expand the novel’s scope in interesting and unexpected ways. Yet these sections tend to emphasize certain emotional notes—fractured love, enduring loneliness, self-doubt—to the point of redundancy ... At times, inevitability begins to outstrip surprise, and feeling is more reported than animated ... In its rendering of Winter Island, though—of sea-soaked splendor and terror and rage—Van Meter’s debut is an unwavering triumph. Equally dazzling is the novel’s emotional ballast ... For all the novel’s visual description, then, it’s Van Meter’s perceptive eye for this—the unseen—that makes for a coming-of-age that’s as human as it is wild.
Read Full Review >>
Rave Michael Schaub,
NPR
She's a memorable character, and Creatures, Van Meter's excellent debut novel, is a beautiful look at how we navigate the pain and heartbreak that comes with being human ... Creatures jumps back and forth in time, with chapters exploring Evie's childhood and ones taking place after her marriage to the fisherman ... This narrative technique works spectacularly well ⁠— by rejecting a strictly linear storyline, Van Meter seems to highlight that lives don't happen in a straight line; we're all a collection of past and present, and we never really escape what's happened to us years ago ... Van Meter also displays a real talent for crafting characters that feel real, with impulses both good and bad, and the capacity to love and to hurt ... frequently heartbreaking, but never mawkish ... Van Meter is a wonderful writer, and her novel is so beautifully written, it's somewhat surprising that it's a debut. Creatures is a gift of a book
Read Full Review >>
Positive Mark Athitakis,
Los Angeles Times
... a novel that aims to both beguile with its lyricism and hit hard with a sense of human ferality. Impressively, she largely pulls it off ... The mood of the novel, especially in the later chapters, is dominated by loss and betrayal ... The sensibility of this short, gemlike novel puts Van Meter, a SoCal native and former surf editor at ESPN, in league with contemporary novelists for whom humans and their environment are tightly bound together—Lydia Millet, Joy Williams and T.C. Boyle come to mind. And Creatures is studded with lovely, melancholy sentences that shimmer like dark sea glass ... Van Meter can also press too hard to stress the sweet-and-sour nature of Evie’s youth, though. The novel’s spell is occasionally broken by purple sentences...or biology factoids awkwardly pushed into metaphorical service ... But in Evie’s closest relationships—with her parents and her husband—Van Meter beautifully evokes the challenge of loving somebody in spite of themselves or yourself ... Creatures delivers a powerful feeling that we, like Evie, are destined to always feel at least a little adrift.
Read Full Review >>
See All Reviews >>
SIMILAR BOOKS
Fiction

Vladimir
Julia May Jonas
Rave
What did you think of Creatures?
© LitHub | Privacy