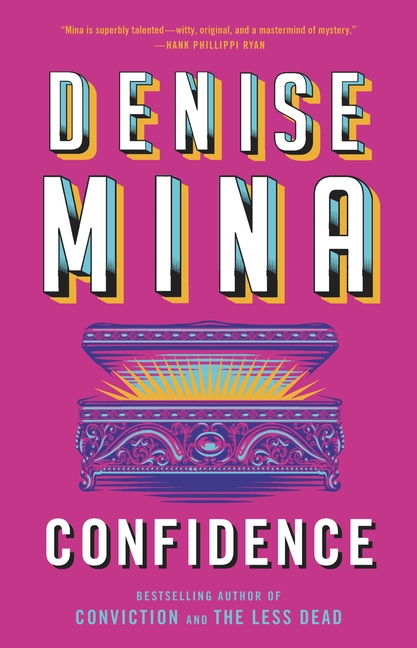 In this thriller and sequel to the Reese Witherspoon x Hello Sunshine book club pick Conviction, Anna and Fin find themselves on another chase across Europe—and another race to save their own lives.

What The Reviewers Say
Rave Allan Massie,
Scotsman
There are some true-to-life passages in Confidence: Anna’s memory of her own troubled past, and her concerns about how learning of this may affect her daughters, for instance, but for the most part this is a playful novel, written with energy, inventiveness and glee...Graham Greene for a long time used to distinguish between his serious novels and those that he styled 'entertainments'...Actually one or two of the 'entertainments' were grim as well as being entertaining – Brighton Rock, for example...Mina doesn’t, as far as I know, make any such distinction, but if she did, this elegant and witty novel would be classed as an entertainment...Ian Rankin has called Mina 'the cream of the crop' of crime writers today...There’s never much point in drawing up league tables of authors, even though most are probably aware of a degree of competition with their contemporaries, and also indeed with others who have gone before...It is enough to say that a book is good or bad...This is a good one...The lively plot brings in a lot of fine things...It may also be a fair, if disturbing, reflection of a world where nobody need know anything except where and how to find out almost immediately anything they seek to know – a world also where, horribly, it seems you are never alone, never under the radar...The immediacy of information retrieval is good fun here, but also disturbing when you think about it.
Read Full Review >>
Rave Kate Ayers,
Book Reporter
Denise Mina’s Confidence will take readers on a lively journey around several countries, while its heroes meet unscrupulous sorts and wiggle their way out of some very tight spots. As they go along, history sneaks in --- a lot of which is due to what Lisa found in that chateau, but also due to how religion shaped what people did over the years. It’s a wild race from the start, from the moment the podcasters make their escape, to the end, when they return home much the wiser.
Read Full Review >>
Rave Kirkus
When Anna McDonald and Fin Cohen leave Glasgow for a family weekend at a rental house, she expects minor disasters...She and Fin are work partners in a popular true-crime podcast, but their domestic situation is intertwined as well—her ex and his ex are now a couple, and all of them are co-parenting Anna’s two young daughters...They all get along, but a new addition to the mix is Sofia, Fin’s young, pretty, poison-tongued girlfriend. So Anna is glad to be distracted by news of the disappearance of a young woman named Lisa Lee—a story that’s a prime candidate for their podcast...Are Anna and Fin unwilling players in an elaborate ruse, or are their lives in danger?...Mina keeps the plot charging at a breathless pace, and Anna is an engagingly tart narrator...Even for true-crime podcasters, the truth is tough to find in this brisk, entertaining thriller.
Read Full Review >>
See All Reviews >>
SIMILAR BOOKS
Fiction

The Devil Takes You Home
Gabino Iglesias
Positive
What did you think of Confidence?
© LitHub | Privacy