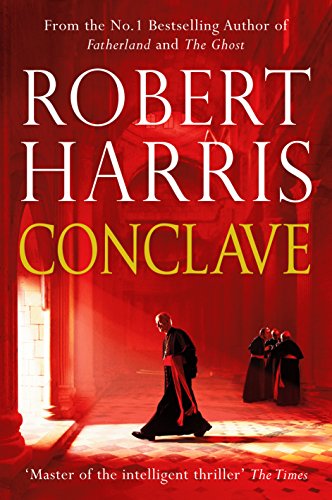 The pope is dead. Behind the locked doors of the Sistine Chapel, one hundred and eighteen cardinals from all over the globe will cast their votes in the world's most secretive election. They are holy men. But they have ambition. And they have rivals. Over the next seventy-two hours one of them will become the most powerful spiritual figure on Earth.

What The Reviewers Say
Rave Ian Sansom,
The Guardian
...there is only one possible word to describe Robert Harris’s new novel, and it is this: unputdownable ... The information isn’t always easy to digest – for the reader or for the writer. As always with Harris, there is a lot of backstory and exposition ... in Conclave the sequence is very simple and pleasing indeed: the pope dies, the cardinals gather, there is the first ballot, there is the second ballot, there is the third ballot, and so on, each stage being accompanied by another twist, some new mystery or complication.
Read Full Review >>
Rave Dennis Drabelle,
The Washington Post
Since the cardinals deliberate in secret and tell no tales, Harris can give his imagination a long leash ... A surprise result is almost de rigueur for an election novel, and Harris does not disappoint. Not only do the cardinals choose a dark horse, but the new pontiff guards an astonishing secret. Regardless of whether you have faith in God, the Church, or neither, Conclave will keep you richly entertained.
Read Full Review >>
Positive Vanessa Friedman,
The New York Times Book Review
The politics of pope-picking clearly captivates Harris, a former political reporter, as it indubitably captivates many of us. The book is filled with procedural and historical detail...Harris has done his research, and it shows, though he is also careful to situate his story in the contemporary world. That tension adds to the ambience ... the twist at the end is about as dramatic an incorporation of the modern cultural conversation about gender and sexuality as can be imagined ... Harris has written a gripping, smart book. The only quibble, ironically enough, is that it could have used a touch more soul.
Read Full Review >>
See All Reviews >>
SIMILAR BOOKS
Fiction

The Devil Takes You Home
Gabino Iglesias
Positive
What did you think of Conclave?
© LitHub | Privacy