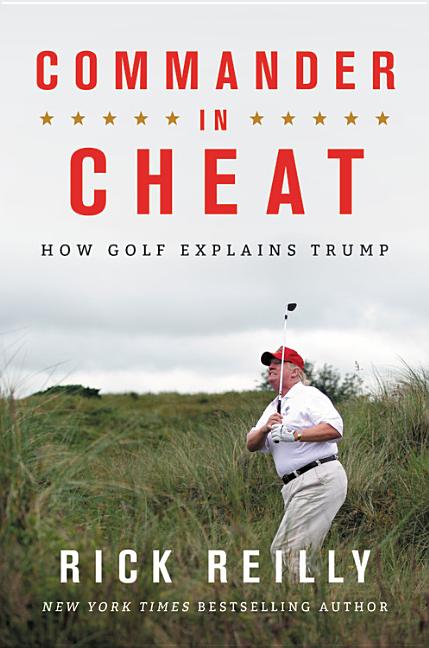 Drawing on personal experience and witness interviews, a sportswriter reveals how Trump lies, intimidates, and files lawsuits to get away with rampant cheating on the links—considering this behavior's relationship to his off-the-course ethics.

What The Reviewers Say
Positive John Cassidy,
The New Yorker
Relying on testimony from playing partners, caddies, and former Trump employees, Reilly pokes more holes in Trump’s claims than there are sand traps on all of his courses combined. It is by turns amusing and alarming ... at the end of his book, he raises the question of whether Trump’s cheating matters and answers it in the affirmative ... For a sportswriter, that’s quite a bit of editorializing, and yet one senses that [writer P.G.] Wodehouse would have approved.
Read Full Review >>
Positive Steve Donoghue,
Open Letters Review
If...narcissism, pettiness, and lying gets your blood boiling, reading Commander in [Cheat] will have you fuming from start to finish ... Many, many writers have opined over the decades about how allegedly revealing a golf course is for a man’s true character. Those writers have all been golfers, and golfers are invariably the source of this man’s-true-character codswallop, but Reilly has a shrewd eye and, the reader quickly senses, a remarkably clear memory. And he’s certain this silly little sport is crucial to his subject ... In scenario after scenario related by Reilly, Trump’s cheating and lying is compulsive, ridiculously operatic, and of course completely undocumented ... Golf or no golf, no other U.S. President has ever been a delusional psychopath. Golf or no golf, that’s what 'explains' Trump—which makes all the book’s stories about people having fun while he lies to them fairly chilling.
Read Full Review >>
Positive Bill Goodykoontz,
The Arizona Republic
...[a] relentless takedown of how President Donald Trump cheats at golf, and what that reveals ... The book is not a left-wing political attack on Trump ... it’s a golfer’s attack on Trump, or at least on the way Trump plays the game, a game Reilly reveres as revealing of character. And he doesn’t like what he sees in Trump. He chronicles incident after incident, like Trump throwing sportscaster Mike Tirico’s ball from the fairway into a bunker ... As any good writer would, Reilly uses golf to reveal larger truths. Or, in this case, lies.
Read Full Review >>
See All Reviews >>
What did you think of Commander in Cheat: How Golf Explains Trump?
© LitHub | Privacy