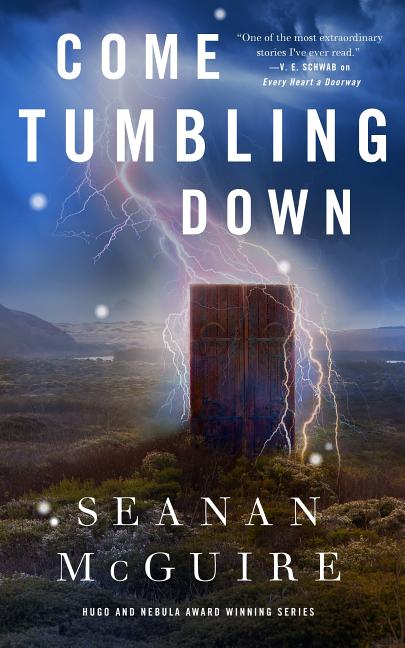 When we Jack left Eleanor West's School for Wayward Children she was carrying the body of her deliciously deranged sister-whom she had recently murdered in a fit of righteous justice-back to their home on the Moors. But death in their adopted world isn't always as permanent as it is here, and when Jack is herself carried back into the school, it becomes clear that something has happened to her.

What The Reviewers Say
Rave Kristi Chadwick,
Library Journal
Themes of dysphoria and gender are smartly inserted through McGuire’s rich prose, with heartfelt scenes keeping each character from getting lost in the action ... The fifth volume of the Wayward Children series gives readers the epic ending (is it really the end?) of Jack and Jill’s story line. Once again, McGuire gives readers a starkly poignant tale of longing, love, and belonging.
Read Full Review >>
Positive Sarah Rachel Egelman,
Bookreporter
If this all sounds a bit over the top, don’t worry. Come Tumbling Down is the latest installment in Seanan McGuire’s fantastic Wayward Children series, and the magic, marvels and murder are all handled with poetry, grace and humor ... a lovely addition to this fantasy series. The writing is as strong as ever, even when the story is a bit less compelling. Readers who have been with Jack and Jill since the impressive Down Among the Sticks and Bones will not be disappointed in the resolutions McGuire offers --- though admittedly the confrontation between the body-switched sisters is less dramatic than one might expect. Other Wayward characters get moments in the spotlight, too ... At first blush, this short novel (with four nice black-and-white illustrations by Rovina Cai) is all about a quick and daring adventure to right some wrongs and address long-simmering sibling rivalries. But McGuire also asks readers to ponder some complex questions and unpack themes, such as loyalty, bravery, identity and the meaning of home. Come Tumbling Down is a real pleasure to read.
Read Full Review >>
Positive Regina Schroeder,
Booklist
McGuire continues to write magnificent worlds with a wonderful variety of characters in the Wayward Children series, and handles questions of body and identity, and the consequences of finding a magical world that is home and then returning to this one, with grace and consideration. The illustrations are a perfect accompaniment to McGuire’s beautiful subversions of the genre.
Read Full Review >>
See All Reviews >>
SIMILAR BOOKS
Fantasy

40
Alan Heathcock
Positive
What did you think of Come Tumbling Down?
© LitHub | Privacy