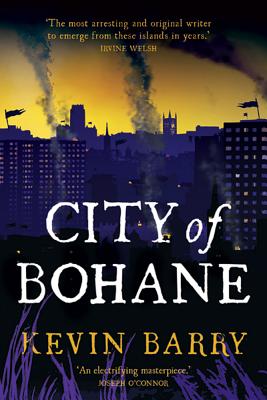 Forty or so years in the future, the once-great Irish city of Bohane is on its knees, infested by vice and split along tribal lines.

What The Reviewers Say
Rave Pete Hamill,
The New York Times Sunday Book Review
City of Bohane, the extraordinary first novel by the Irish writer Kevin Barry, is full of marvels. They are all literary marvels, of course: marvels of language, invention, surprise. Savage brutality is here, but so is laughter. And humanity. And the abiding ache of tragedy … In prose that is both dense and flowing, Barry takes us on a roaring journey, among human beings who are trapped in life its own damned self. Nostalgia grips many of them, even when they slash angrily at sentimentality. None of it is real, yet all of it feels true … Reading this novel, with all of its violence, I also felt a kind of joy exuding from its author. The joy of finding, and sustaining, a voice. The joy of being surprised by his own inventions. I suspect that any reader, including the Irish, will sense that joy. It’s about freedom.
Read Full Review >>
Rave Greg Londe,
The Los Angeles Review of Books
Bohane is a cutthroat warren of sparring gangs and sinister alleyways, a hybrid place full of warriors and wastrels that can still, for all the infighting, speak with a collective ‘we’ that constantly gauges its own bad moods … Within Barry’s narrative world, it matters less who was betrayed and what was suppressed than that things are besmirched. History hurt; you learned it by rote; now get on with your dancing and dying. The plot of the novel, simple and generic but great fun, gets on fine … Barry has written a ripping good tale about dangerous people wrestling for control of an uncontrollable place, which is at once the best caricature of contemporary Ireland yet to appear this century and a book that seems willfully disinterested in claiming that title.
Read Full Review >>
Rave Kevin Canfield,
The San Francisco Chronicle
...inspired and emotionally rich … Though he spins a great tale, the most important facet of City of Bohane isn't its plot. What really matters, what distinguishes the novel from so many others, is Barry's lively, original and charismatic voice. A native of Limerick, Ireland, who's in his early 40s, Barry has a linguist's ear for colloquialism, an anthropologist's eye for detail and a daffy fantasist's appreciation for tall tales.
Read Full Review >>
See All Reviews >>
SIMILAR BOOKS
Fantasy

Win Me Something
Kyle Lucia Wu
Rave
What did you think of City of Bohane?
© LitHub | Privacy