City of a Million Dreams: A History of New Orleans at Year 300 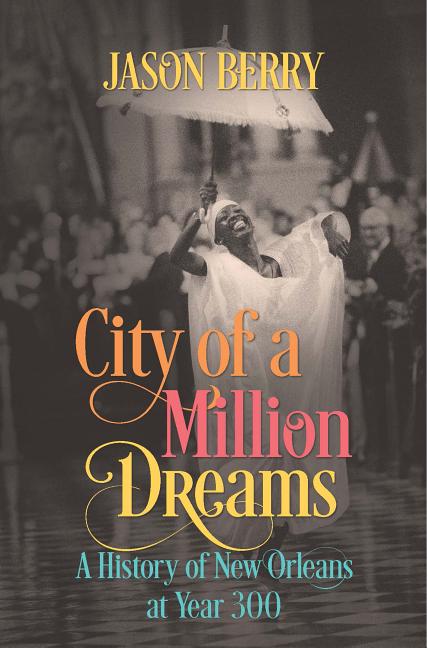 Author Jason Berry orchestrates a parade of vibrant personalities. The profiles of this extraordinary cast furnish the narrative of this beloved city, famous the world over for mysterious rituals as people dance when they bury their dead.

What The Reviewers Say
Rave Susan Waggoner,
Foreword Reviews
Hypnotic ... puts the emphasis on culture, and it marshals fascinating and seemingly disparate details and characters into a coherent, compulsive whole ... Over three dozen black-and-white photos bring the city to life, while numerous quotes and citations are sourced in well-ordered endnotes. City of a Million Dreams is history writing at its best, in which high-caliber prose manages to be as interesting as its subject.
Read Full Review >>
Positive Larry Blumenfeld,
The Wall Street Journal
Jason Berry’s bold, witty and deeply researched history of his native city homes[sic] in on the sound of the place ... avoids allusions to a melting pot or, as commonly applied to New Orleans, a gumbo. [Berry's] city is a collection of 'map-of-the-world neighborhoods,' each with a distinct identity ... Berry might have dug more deeply into how this dynamic has played out in the 'new' New Orleans—why community clubs took the city to federal court over jacked-up fees for Sunday second-line parades, or how the brass-band and Mardi Gras Indian cultures he rightly celebrates have faced fresh waves of police intimidation. The 'resilience' Mr. Berry praises has become, for some New Orleans residents, a dirty word ... Yet Mr. Berry understands these issues as fully as anyone. His optimism, a faith of sorts, is grounded in the very story he tells ... an indispensable history, explains both what we might take care not to lose and why it’s so easy to believe it will always be so.
Read Full Review >>
Rave Ed Conroy,
Houston Chronicle
With City of a Million Dreams, Berry has turned his considerable reporting prowess toward profiling the city he loves like no other with an abundantly evident, ardent passion ... extraordinary ... The result of over a quarter century of Berry’s indefatigable research, this 332-page, extensively footnoted and annotated work captures the reader’s attention with a cavalcade of astoundingly detailed accounts of the exploits and adventures of a cornucopia of outstanding people who have left an enduring mark on New Orleans and the conflicts that have forged its distinctive urban culture ... Perhaps Berry’s greatest achievement in writing this book is to create a seamless, holographic tapestry out of the many disparate threads in New Orleans’ history, tying together stories from its Spanish, French, American, Confederate, Reconstruction and post-Reconstruction periods, during which it reinvented itself in line with the mythology of what 19th-century white supremacists called the Lost Cause — through the civil rights movement and desegregation all the way to Katrina and the city’s rebirth ... City of a Million Dreams is an inspiring response to those who would have left New Orleans to decay away in the wake of Katrina, a tale of resilience and progress in the face of great odds.
Read Full Review >>
See All Reviews >>
What did you think of City of a Million Dreams: A History of New Orleans at Year 300?
© LitHub | Privacy