Chronicle of a Last Summer 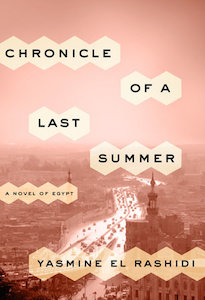 A debut novel set in Cairo in 1984 in which a young Egyptian woman recounts her personal and political coming of age.

What The Reviewers Say
Positive Claire Fallon,
The Huffington Post
Chronicle of a Last Summer reads as an impressionistic memoir (though of course it’s fiction), a philosophical meditation on the nature of change and stasis, the story of a family fractured by political circumstance ... this digressive, philosophizing book takes advantage of her strengths in observation, psychological and otherwise, and in analyzing the dynamics beneath Egypt’s recent instability ... A thought-provoking story of a young writer growing up in Egypt through three summers of unrest.
Read Full Review >>
Mixed Rajia Hassib,
The New York Times Book Review
This 'silence of objectivity and being an observer' informs not only the novel’s moral core but also its style, which is carefully constructed to underscore the book’s political theme ... El Rashidi portrays the city and its inhabitants with an enviable eye for detail, accurately illustrating the colorful culture and skillfully using the city’s progression over the decades to mirror the country’s political history. However, the novel’s obsessive preoccupation with politics stifles its plot ... Ultimately, the novel’s unwavering commitment to educating readers on a political history that spans decades curbs its creative potential as a work of fiction.
Read Full Review >>
Positive Marya Hannun,
Los Angeles Review of Books
...Chronicle of a Last Summer by Yasmine El Rashidi explore the Egyptian 'after' with all of the dizzying frustrations, contradictions, and possibilities that the post-revolutionary world affords ... Written in English, it is the first-person account of a woman coming of age in a politically fraught Egypt ...political experience in El Rashidi’s work is colored by erasure ...El Rashidi’s narrator points to the limitations of language for narrating contemporary political experience... If revolution is a grand climax, Chronicle reminds us it is forged by hot summer days, simmering anger, and monotony ... In the end of Chronicle, we are left in the Egypt of 2014, which bears a striking resemblance to the Egypt of 1984.
Read Full Review >>
See All Reviews >>
SIMILAR BOOKS
Fiction

This Other Eden
Paul Harding
Rave
What did you think of Chronicle of a Last Summer?
© LitHub | Privacy