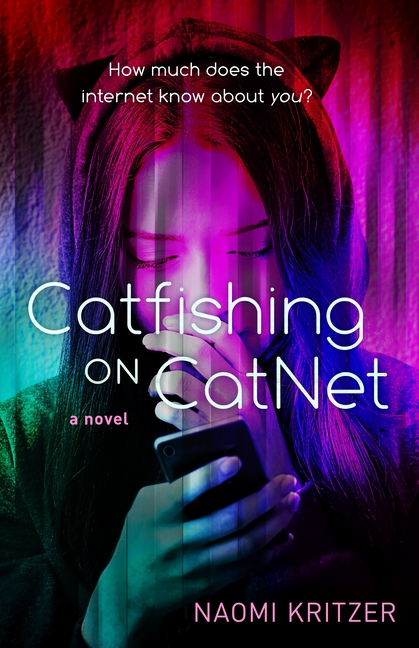 Because her mom is always on the move, Steph hasn’t lived anyplace longer than six months. Her only constant is an online community called CatNet―a social media site where users upload cat pictures―a place she knows she is welcome. What Steph doesn’t know is that the admin of the site, CheshireCat, is a sentient A.I.

What The Reviewers Say
Rave Amal El-Mohtar,
The New York Times Book Review
... a pure delight ... a brilliant young adult thriller that’s as tender and funny as it is gripping and fast-paced ... This book is perfect. From the believable teenage voices to the shockingly effective thriller plot, it swings effortlessly from charming humor to visceral terror, grounding it all in beautiful friendships, budding romance and radical acceptance. If you enjoyed Martha Wells’s Murderbot series or Jeph Jacques’s web comic Questionable Content, I feel very confident you’ll love this book. Give it to the queer teenager in your life, or any adults you know who miss a kinder, gentler internet.
Read Full Review >>
Rave Caitlyn Paxson,
NPR
... an engaging blend of tech thriller, mystery, and teen drama that kept me up reading way later into the night than was strictly wise. But I almost didn't read it. The title, Catfishing on CatNet, was nearly a deal-breaker for me. It sounded goofy and awkwardly trendy in a try-hard sort of way...Now I'm here to tell you that if the title has the same effect on you as it did on me, you should get over it and try it anyway ... the teen drama aspect is heartfelt and relatable, the mystery has enjoyable and sometimes shocking twists and turns, and the trajectory of the thriller plot is quite frankly bonkers. Just when you think it's about to slow down or pull back, instead it goes there and then keeps on going. It doesn't always make the most sense, but when you're talking about impromptu armies of hijacked robots, who even cares? It's bold and absurd and a whole lot of fun ... Steph's life is the stuff of made-for-TV drama, but despite that, she feels deeply relatable and accessible as a character ... heralds a coming of age for both its human and AI protagonists, and the parallels and differences are illuminating ... taps lightly on the concept of personhood and the ethics of artificial intelligence, but it doesn't trouble itself profoundly. There's never any question of whether or not we're on board with CheshireCat being a person. They just are ... [a] wild, rollicking ride, and it leaves it mark.
Read Full Review >>
Rave Ellen Cheeseman-Meyer,
Tor.com
Kritzer has a gift for writing things that are analytical, insightful and incredibly reassuring. And the idea of an artificial intelligence that wants to improve our lives in return for pictures of cats, is all of those things ... For readers of a certain age, CatNet is a nostalgic monument to a time when the internet was young and new and felt safe in a way that it never does now ... a story that reminds us that we’re all misfits in our own way—that there are things others fail to understand about us, and things we fail to understand about others ... Creativity and solidarity ultimately save both Steph and CheshireCat. Despite the menace of the threats, those themes create such a comforting universe that the book is the literary equivalent of a weighted blanket. I love it unreservedly. It ends on a cliffhanger. I’m so excited about that because it means there’s MORE.
Read Full Review >>
See All Reviews >>
SIMILAR BOOKS
Fiction

Dirt Creek
Hayley Scrivenor
Rave
What did you think of Catfishing on Catnet?
© LitHub | Privacy