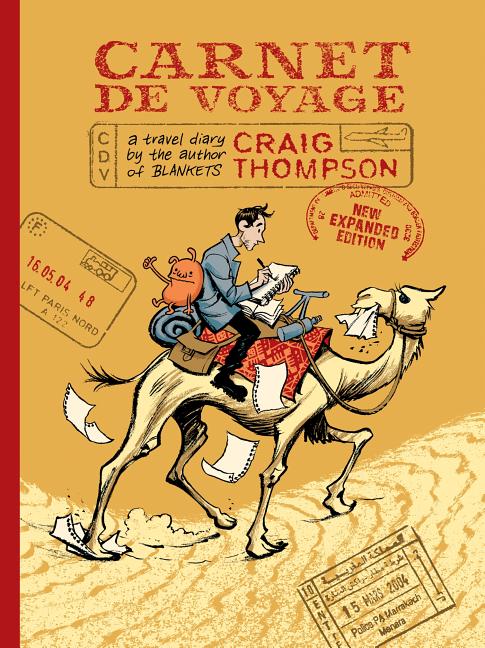 A new expanded version of the travel journal Thompson penned on his book tour in Europe and Africa for his acclaimed graphic memoir Blankets.

What The Reviewers Say
Rave Rachel Cooke,
The Guardian
Clever, funny and disarmingly honest, it is, of course, predictably lovely to look at; Thompson is a master sketcher. What I like about it most, though, is the way it acts as an antidote to the all-seeing, all-consuming power of the smartphone. As its author notes in his opening pages, no cameras or mobiles were used in its making: his eyes and his brush pens did all the work ... A lot of this was terribly and painfully familiar to me, and will be to anyone who has travelled alone. The highs are incredible: those sudden epiphanies in which you’re consumed by a sense of freedom and privilege. But then, of course, there are the lows, when you must face up to how unexpectedly pathetic you are: unable, sometimes, even to leave your hotel room, however grim ... Thompson captures all of this, and if his narrative is, as a result, sometimes a little claustrophobic, you always forgive him for it. All human life is here: in his head, as on the teeming streets.
Read Full Review >>
Positive Helen Shaw,
The New York Times Book Review
The sketchbook-cum-travelogue is quite a dreamy object—it doesn’t use many separated panels, and drawing often fills the page, black crosshatched edges feathering and dissolving into the ragged white surround. Like others of its type, the book encourages the eye and mind to wander. This is travel in its exploded view. Close-ups of French friends jostle alongside wide-screen landscapes; little notes and arrows carry us along Thompson’s stream-of-consciousness; there’s a page on how to wind a turban, complete with steps ... Thompson’s drawings are still lush and considered, flowing across the pages from his Pentel brush-pen, but the book is looser, sweeter, more suggestive than his other pieces. Yet it’s not all sweet. He often hates the trip ... Because of the way the Carnet functions, because it was made quickly enough to seem relatively candid, we now know how much of Thompson’s mind is taken up with searching out and drawing women ... sex confuses Thompson’s eye—and he sees the same curve of hip, the same bowed lip in girl after girl after girl. Explore as far as he might, that’s a blindness he does not escape.
Read Full Review >>
Rave J.M. Suarez,
PopMatters
Thompson makes it clear that this diary is composed of quick snapshots and sketches, without the use of photographs, and the looseness of the drawings comes through beautifully. Thompson is a gifted cartoonist, with an ability to tell long, complex stories while never sacrificing intricate details or the fluidity of his drawings. Here, his sketches still manage to convey those same skills, while retaining an on-the-fly quality that works especially well for the genre ... It's Thompson's candor in conveying what he feels in the moment, while still acknowledging his sometimes ill-tempered interactions and prejudices, that make Carnet de Voyage so engaging ... Carnet de Voyage captures many of the highs and lows that accompany traveling for an extended period, and Thompson's willingness to be present and honest make it a perfect bridge between his two larger narrative accomplishments, Blankets and Habibi.
Read Full Review >>
See All Reviews >>
What did you think of Carnet de Voyage?
© LitHub | Privacy