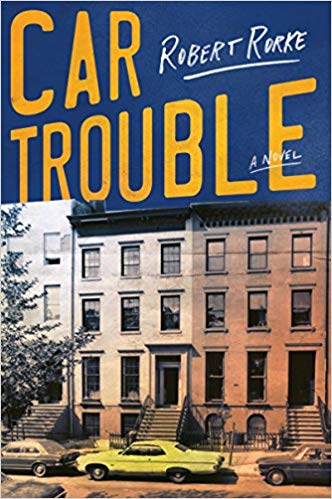 A charming, self-destructive Irish-American father takes his family on a troubled joy ride.

What The Reviewers Say
Pan Rayyan Al-Shawaf,
The Philadelphia Inquirer
Car Trouble reads like an unreconstructed memoir. As it happens, it may be just that, which would probably account for its needless length and flabbiness. Car Trouble is in fact about dad trouble, the kind endured by thoroughly decent and undeniably simpatico narrator/protagonist Nicky Flynn during his teen years in early 1970s Brooklyn. Given that Nicky's normally canny father is slipping into alcoholism, he's causing his family problems galore — with more to come ... It remains unclear whether Car Trouble mirrors Rorke's own experiences growing up in his native Brooklyn (where he still lives). Were it packaged as a memoir, one might view its scattered and plot-impoverished nature more charitably. Yet Car Trouble is touted as a novel, and as such takes upon itself a more considerable onus. The result proves no better than middling, with a well-drawn and appealing protagonist able only intermittently to compensate for a humdrum and overlong story.
Read Full Review >>
Rave Michael Cart,
Booklist
Teenage Nicky tells this sad story in his own, often eloquent, first-person voice. Even as his father’s life is devolving, Nicky’s is evolving as he comes of age in this sometimes funny but always melancholy novel. With a vividly realized setting—Brooklyn in the 1970s—the story is sharply written, inviting deep empathy from readers, who will find universal truths in this compelling tale of a single family.
Read Full Review >>
Mixed Kirkus
...Patrick Flynn is a charismatic, impulsive drunk who grandly brings home a string of cars with nicknames like The Black Beauty—a ’58 Pontiac Parisienne—bought on the cheap at police auctions and later ditched because of engine problems. The cars are beautiful, but their insides are rotted out—just like Flynn’s own promises to his children and long-suffering wife Claire ... the narrator,...Nicky balances the story of his father’s decline with his own maturing awareness of life, especially a love of acting that hints at his future theater career. At times the story arc feels a little predictable and the scenes unnecessarily padded out, but Rorke’s writing is always assured as he paints a charming portrait of 1970s family life right down to the Amana fridge in the kitchen and Filet-O-Fish Fridays for the Catholic school kids during Lent ... What readers learn in Rorke’s moving, bittersweet story is that hard realizations are often necessary on the road to discovering one’s true self.
Read Full Review >>
See All Reviews >>
SIMILAR BOOKS
Coming Soon

The Forger's Daughter
Bradford Morrow
Rave
What did you think of Car Trouble?
© LitHub | Privacy