Cannabis: The Illegalization of Weed in America 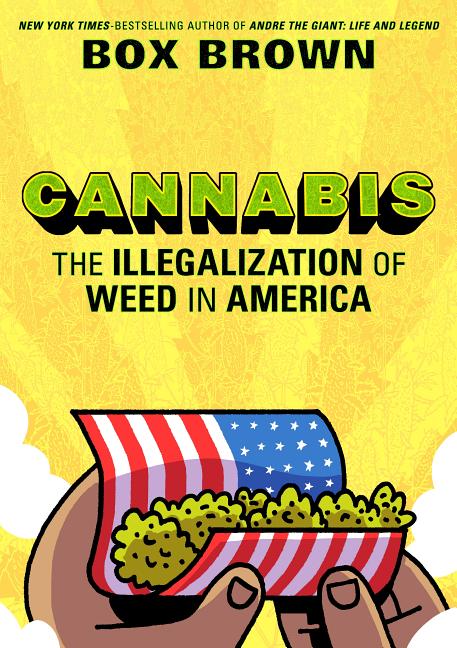 From the nineteenth century to the twenty-first, cannabis legislation in America and racism have been inextricably linked. In this nonfiction graphic novel, Box Brown explores this history.

What The Reviewers Say
Positive Dominic Umile,
Hyperallergic
In a cleanly framed, black-and-white nonfiction comic, Philadelphia cartoonist Box Brown examines marijuana ... the first graphic unpacking of this history ... Brown’s new book is definitely funny, even if the subject isn’t much of a laugh at all. Cannabis is more of an exploration of how racist propaganda helped produce laws that have unfairly punished minorities and engendered anti-immigrant sentiment in the US for as long as the plant has been here ... as Brown ably demonstrates, the former Federal Bureau of Narcotics Commissioner’s imprint on American drug policy has loomed large whether he’s been around to see it or not.
Read Full Review >>
Positive Josh Kramer,
The Comics Journal
For nonfiction, Brown is refreshingly on the more cartoony end of the spectrum. He’s not afraid to draw motion lines or lightning bolts of shock or pain. It’s not his first rodeo—he knows to mix up his compositions to keep it interesting for the reader ... Brown deftly lays out marijuana’s historical contributions towards many contemporary societal ills, from mandatory minimums to the demonization of the 'inner city.' The narrative can be a little too reductive at times ... The book is a welcome addition to the contemporary conversation about marijuana’s role in society. My one real complaint is where the book ends. After bringing the history up to California’s legalisation of medical marijuana in 1996, Brown quickly winds down with a five page closing argument that shies away from addressing contemporary laws and policies.
Read Full Review >>
Positive Hans Rollmann,
PopMatters
Brown offers a visually appealing crash course in this process, highlighting the key moments and events in this sad history. He adopts a narrative, instructional graphic novel style, with consistent square-panelled pencil sketches mostly narrated by the author (with the exception of a few dramatized instances). The author's use of grim black and white coloring is an appropriate choice for a subject which has been treated in overly reductionist, black and white style by law enforcement and government policy for so many years ... an important reminder of how racism fuels moral panics, and how the so-called evidence used to justify both is often, predictably, falsified ... offers a superb study both in the nefarious process by which cannabis was rendered illegal, as well as the broader hope that in the long run, reason and tolerance will prevail.
Read Full Review >>
See All Reviews >>
What did you think of Cannabis: The Illegalization of Weed in America?
© LitHub | Privacy