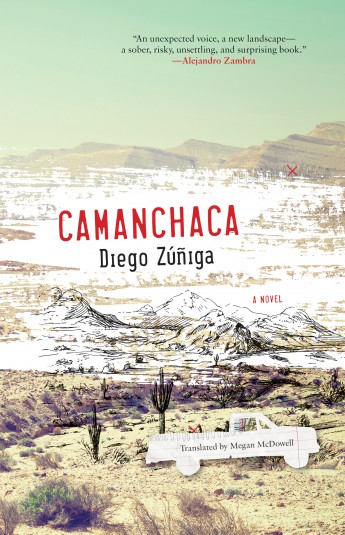 Publisher
Coffee House Press
Date
March 7, 2017
A long drive across Chile's Atacama desert, traversing 'the worn-out puzzle' of a broken family—a young man's corrosive intimacy with his mother, the obtrusive cheer of his absentee father, his uncle's unexplained death—occupies the heart of this novel from Chilean author and journalist Zúñiga.

What The Reviewers Say
Rave Charlotte Whittle,
BOMB
Anecdotes of violence litter the background of the protagonist's own story, resisting interpretation; their arbitrariness adds to the mood of bewilderment ... Camanchaca succeeds at combining the particularity of its setting with scenarios that feel almost classical: a murdered brother and the perversion of the mother-son relationship. But it also dramatizes the struggle to understand the previous generation, whether the truth sought is that of family or country ... Zúñiga does not dissect the parents' involvement in politics but gestures at their involvement in a small and sordid personal affair. His narrator, whose emotional detachment and spare, anti-lyrical voice is perfectly captured by McDowell, can only imagine a past before the crisis.
Read Full Review >>
Positive Graham Oliver,
The Rumpus
Reading through the book puts you on the edge of your seat, constantly expecting a breakthrough. The complete explanation for what’s going on, always seems like it’ll be on the next page. But Zúñiga is a master of showing that the full story is never the full story, and it’s never going to satisfy or justify ... the precision of word choice required to make the narration work is really tight. But McDowell has proven to be an expert ... The individual plotlines bleed over one another, which works really well thematically. It does make the book hard to reengage with once set down, though. I found myself having to rewind and reread the previous few pages to figure out what exactly was going on. The good news is that this is a very short book (~110 pages with a lot of white space), so picking it back up shouldn’t be much of an issue. At the end of the book, I was satisfied. I felt like I understood the character who had been a mystery at the beginning. But in a way, this book also feels like the first half of something bigger. The narrative offers revelations but leaves things frustratingly unchanged. Maybe wanting more is a sign of something lacking, or maybe it’s a sign that Camanchaca is a good story. Regardless, this is a masterfully crafted short novel.
Read Full Review >>
Positive Nathan Scott McNamara,
Electric Literture
Camanchaca has one of the strongest novel openings I’ve read in years, a knockout vignette that disarms the reader ... Though the chronological jumps are frequent and the scenes are compact, Zúñiga deftly threads the storylines with evocative anchoring sensations ... ’ve read this short, poetic book several times and I still don’t entirely understand what happened to Uncle Neno?—?there’s a series of infidelities with the mother and father. There’s a bad accident out on a desert stretch of road?—?but maybe it’s better that way; maybe it’s more representative of the fragmented way a person might inherit trauma.
Read Full Review >>
See All Reviews >>
What did you think of Camanchaca?
© LitHub | Privacy