Call Us What We Carry: Poems 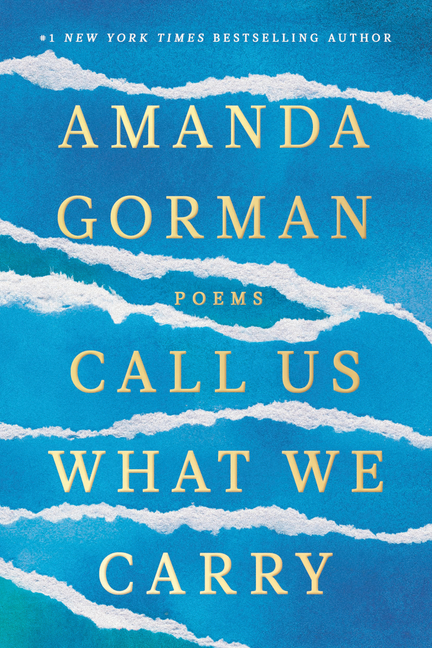 What The Reviewers Say
Rave Kit Fan,
The Guardian (UK)
A soaring sense of history and solidarity pervades Gorman’s debut collection ... Gorman’s poetry puts immense pressure on our present moment, committing itself to an archaeology of our past and conservation of our future ... One of the most haunting things about her book is its retreat from the first-person singular ... Gorman’s affirmative choric we echoes Martin Luther King’s memorial dream and John Lennon’s utopian lyricism, but her music also draws on the new dimension opened up by trailblazing poets such as Elizabeth Alexander, Anne Carson and Tracy K Smith ... wide awake to the complex strata of human history and restlessly original in its poetic form ... Gorman is an erudite absorber, resister and recreator of vocal, textual and etymological legacies. Without being overburdened by references, her poems allude to multilayered sources ... Directly and indirectly, grief as ubiquitous as light holds Gorman’s book together ... Gorman has written a mnemonic symphony of hope and solidarity in the face of the 'vanishing meaning' of our time, speaking eloquently with 'the lip of tomorrow'.
Read Full Review >>
Rave Joshunda Sanders,
Oprah Magazine
Gorman veers away from the aspirational and hopeful tone of her famous inaugural poem...to mine pandemic-induced grief and reflection. There is anger, confusion, and sadness in these poems, but there is also a great deal of history and documentation ... Given the politicized nature of Critical Race Theory discourse fueled in no small part by the continued visibility of The 1619 Project, Gorman’s section 'Atonement' reads as an innovative, understated, and subversive text ... Between musings and observations, Gorman’s finely attuned attention to the manifestations of our fear, our longing, our loss of so much but particularly, our control, also reminds us of her role—and that of poetry—in recovery, healing, moving on ... The liberating force of the stories these poems tell about our resilience and survival showcases a powerful griot for our times.
Read Full Review >>
Positive Molly Young,
The New York Times Book Review
If Gorman’s performance [at the inauguration] was widely perceived as existing in one mode—an exuberant call to action and, per the assignment, a meditation on unity—its effect on the page is more subtle, and strewn throughout with subversive detonations ... The poet and professor Stephanie Burt has written that 'there is no one purpose to all poetry; there are only poems, lots of them, memorable and ridiculous and calm and volatile and heartbreaking and fascinating poems.' Gorman packs all of the above into one volume. There are focused and pithy poems. There are poems arranged in playfully heretical formats...a poem in the shape of a face mask, a poem in the form of a text exchange. There is reverence and effervescence; gravity and impishness, strong poems and weak poems ... The weak poems suffer from a reliance on dusty imagery ... An idiosyncrasy of the book is Gorman’s fondness for didactic digressions ... When these work, it feels as though Gorman is picking shiny apples of knowledge and presenting the best specimens in a basket for the reader’s enjoyment. When they don’t work...they feel like excruciating intrusions ... I don’t get the sense that 'digestibility' is high on the poet’s list of writerly priorities, and I found the variation in Call Us What We Carry to be mostly stimulating rather than discombobulating—an act of both courage and mischief. Why not experiment, mess around a little ... Yeats said we produce rhetoric out of the quarrel with others and poetry out of the quarrel with ourselves. Gorman makes the case—often convincingly —that poetry may come from both.
Read Full Review >>
See All Reviews >>
SIMILAR BOOKS
Hottest Books of the Season

The Hurting Kind
Ada Limón
Rave
What did you think of Call Us What We Carry: Poems?
© LitHub | Privacy