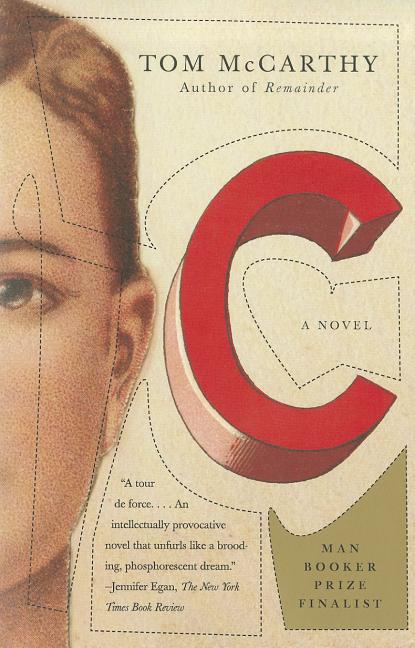 Opening in England at the turn of the twentieth century, C follows Serge Carrefax, whose father experiments with wireless communication while running a school for deaf children. As Serge goes from a Bohemian spa to the skies of World War I, and from a German prison camp into the tombs of Egypt, we follow his life through the tumultuous course of the nascent modern era.

What The Reviewers Say
Rave Stuart Evers,
The Telegraph (UK)
It does not take McCarthy long, however, to upset the reader’s expectations; there is to be no painstakingly researched birthing scene, no parental anguish. Instead, a narrative of energy, invention and intelligence begins to take shape: one that is at once dazzling and profoundly resonant ... In a novel burning with ambition, McCarthy sets his goals high and nowhere is this better achieved than in the chapters Serge spends in the air, as a birdman with the Royal Air Force. McCarthy’s prose rises to the challenges presented by aerial flight and his descriptions of the air battles that rage around Serge are chilling, exciting and energetic – filtered as they are through Serge’s increasingly drug-sharpened senses ... In C, as with his previous fiction, McCarthy has attempted to take the avant garde’s concerns and lash them to plot and narrative – and the result is a dizzying, mesmeric and beautifully written work that repays close rereading ... Tom McCarthy has written a novel for our times: refreshingly different, intellectually acute and strikingly enjoyable.
Read Full Review >>
Positive Jennifer Egan,
The New York Times Book Review
C is a rigorous inquiry into the meaning of meaning: our need to find it in the world around us and communicate it to one another; our methods for doing so; the hubs and networks and skeins of interaction that result ... here, he fuses a Pynchonesque revelry in signs and codes with the lush psychedelics of William Burroughs to create an intellectually provocative novel that unfurls like a brooding, phosphorescent dream ... For all of Serge’s lust for coherence, C...raises apt questions about the moral and mental hazards of seeking double meanings from the external world. ... McCarthy’s prose strategy in C is not far from Serge’s druggy reveries ... These lectures drag despite their thematic relevance; they feel artificially planted and, at times, alienatingly technical ... Still, the book’s lingering resonance owes less to its strenuous intellectual girding than to the mystery the story nonetheless retains. Like life, which we overinterpret at our peril, this strange, original book is — to its credit — a code too nuanced and alive to fully crack.
Read Full Review >>
Mixed Christopher Tayler,
The Guardian (UK)
C is a 1960s-style anti-novel that's fundamentally hostile to the notion of character and dramatises, or encodes, a set of ideas concerning subjectivity. On the face of it, though, it's a historical fantasy, sometimes witty and sometimes eerie, built around the early years of radio transmission ... Though Serge holds the foreground, it's plain from early on that the novel is chiefly structured by the idea of transmission and reception, which serves as a metaphor for, among many other things, and very roughly speaking, an implied relationship between language, technology and subjectivity ... The near-Joycean scale and density of all this is truly impressive, as is McCarthy's ability to fold it into a cleanly constructed narrative, which has its boring stretches but also moments of humour and weird beauty. Yet its mind-blowingness as a reading experience depends on the reader's appetite for certain types of analysis. Armed with various concepts from Heidegger, Freud or Paul Virilio, say, it would be possible to unpick its implications more or less indefinitely, but there's a dispiriting feeling that the book has been reverse-engineered with an eye to achieving just that.
Read Full Review >>
See All Reviews >>
SIMILAR BOOKS
Fiction

Jeeves and the Leap of Faith
Ben Schott
Mixed
What did you think of C?
© LitHub | Privacy