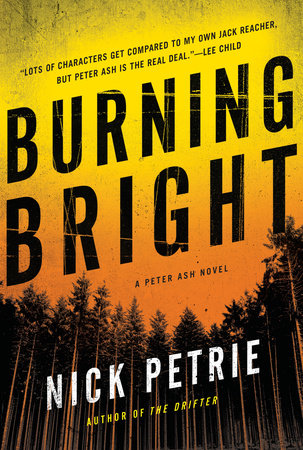 What The Reviewers Say
Rave Carole E. Barrowman,
The Milwaukee Journal Sentinel
Nick Petrie’s thrilling Burning Bright transported me to the woods of northern California and the wilds of Washington state and I loved every page of this adrenaline-fueled journey. In fact, a beginning chase scene in the redwoods is not only breathtaking, it’s also one of the most original action scenes I’ve read ... It’s a formula Lee Child has driven into the ground. Thankfully, Petrie’s charging it with new life.
Read Full Review >>
Rave David Martindale,
The Philadelphia Inquirer
The first quarter of the book is a roller-coaster adventure in an almost literal sense, a fast and dangerous chase that begins with a zip-line ride from tree to tree and ends with a wild auto pileup and shoot-out along a desolate forest road. It's what Peter thinks of as 'a pretty interesting day.' The story morphs into a complicated high-tech conspiracy thriller that fans will find both surprising and comfortably familiar. Child fans complain that we read his Reacher novels much faster than he can write them. So it's nice to have somebody new like Petrie, a very talented writer, who can help us endure the wait till our main man drifts back into our lives.
Read Full Review >>
Rave Tina Jordan,
Entertainment Weekly
For me, no crime-fiction character has ever measured up to Jack Reacher—until, that is, I met Peter Ash, a former Marine lieutenant deeply damaged by his tours in Iraq and Afghanistan (his PTSD manifests itself as intense claustrophobia). In this, his second outing, Ash stumbles upon an investigative journalist who’s gone into hiding in the California wilderness, desperate to evade the men who murdered her mother. Petrie’s writing is smooth, almost melodic, and he’s very, very good at racheting up stomach-churning tension.
Read Full Review >>
See All Reviews >>
SIMILAR BOOKS
Fiction

The Devil Takes You Home
Gabino Iglesias
Positive
What did you think of Burning Bright?
© LitHub | Privacy