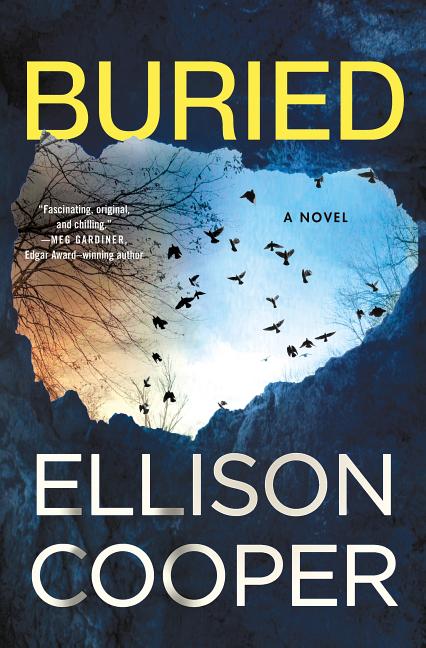 In this follow-up to Caged, Senior Special Agent Sayer Altair is called in when an off-duty FBI agent and his cadaver dog fall into a sinkhole filled with human bones that date back almost two decades, the same time a beloved local teen disappeared. The cold case quickly heats up when Sayer's team finds two fresh corpses among the bones.

What The Reviewers Say
Rave Angie Barry,
Criminal Element
Buried proves Cooper’s chops yet again. The anthropologist/investigator-turned-novelist clearly has the background necessary to bring Sayer and her team authentically to life; the science and FBI work are both handled deftly. While Sayer searches for the missing women, she also works on important research into sociopathy, which nicely introduces a shadowy new villain playing a much longer game than the immediate serial killer. The characters are all intriguing on their own and equally fun as a unit. This is a diverse bunch ... Written in short, succinct chapters, Buried is a quick read with a great balance of dialogue vs. action. Cooper never gives us enough time to get bored or bogged down, moving the narrative at a swift clip and sprinkling in important clues and revelations at a satisfying pace ... this is a layered story that manages to keep every subplot interesting and vital ... Buried is an exciting and solid standalone worth picking up—and perfect for fans of Kathy Reich’s Temperance Brennan series looking for a new scientific heroine to root for.
Read Full Review >>
Positive Elyse Discher,
BookPage
Cooper’s focus on atmosphere gives the novel the tight pacing of a thriller, while also producing a constant feeling of unease more typically found in the horror genre. This is not the book for a cozy mystery fan. Sayer stands out in a largely whitewashed genre as a woman of color, and her awareness of how her race affects others’ perceptions of her is present but never overly evangelized to the reader ... By depriving Sayer of departmental resources and deus ex machina forensic breakthroughs, the narrative focuses on her brilliant profiling and detective skills, making Buried feel like an old fashioned whodunit as the reader pieces the clues together along with Sayer.
Read Full Review >>
Rave Henrietta Verma,
Booklist
Cooper has created a lovable crew of family and colleagues around Altair; the author’s whip-smart plotting and crisp writing make them characters to remember. This one will leave fans waiting for more, and they may not have long to wait, as Cooper appears to be following a one-book-a-year schedule. The combination of science and personal warmth makes Cooper’s protagonist a natural for devotees of Patricia Cornwell’s Kay Scarpetta.
Read Full Review >>
See All Reviews >>
SIMILAR BOOKS
Fiction

The Devil Takes You Home
Gabino Iglesias
Positive
What did you think of Buried?
© LitHub | Privacy